Wesson dominates in win against Enterprise 64-36 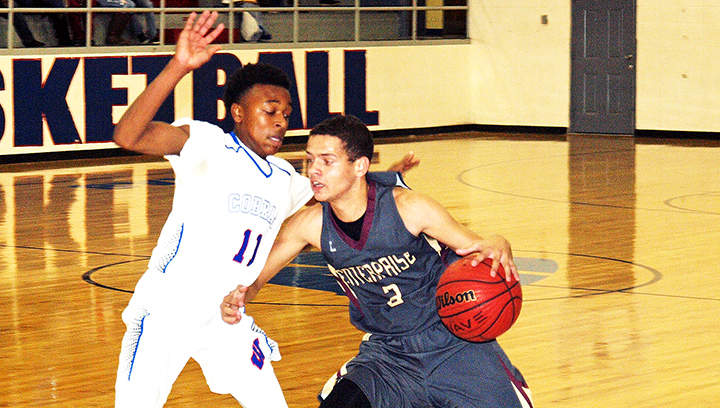 Photo by Tracy Fischer/Trevor Freeman (3) is guarded by JD Allen (11) in the Wesson vs. Enterprise game Friday.

The game started with the Lady Jackets getting an early lead with shooters junior guard Carlee Nations and senior forward Michelle Herrington putting 10 points on the score board to make it 15-8 in the first quarter.

Wesson battled to catch up with shots by senior guard Aurianna Vaughn and sophomore guard Alashyia Mims, but Enterprise’s Herrington blocked several attempts by Wesson to help maintain the lead. The Lady Jackets maintained their lead throughout the game and finished with a winning score of 45-31.

Nations was the top scorer of the game for Enterprise with 18 points, which included four three-pointers on the night. Herrington helped contribute to the scoring for Enterprise with 10 points. Senior guard Courtney Greer and junior guard Jana Nations had chipped in five points each. Junior forward Monisha Pendleton had 10 rebounds and Herrington had eight rebounds and two steals. Greer had seven rebounds and four steals. The Lady Jackets made 15 of 22 free throws for the night.

For Wesson, Vaughn was the top scorer with 16 points and Mims scored five points. Senior guard Mary Allen and freshman guard Shelbi Maxwell had four points each. Junior guard Jamiya Christmas had eight rebounds and one steal. Maxwell had three steals for the game times for the Lady Cobras. The Lady Cobras shot 8 for 15 from the free throw line for the game, which ultimately cost Wesson the game.

“We missed too many lay ups and free throws which hurt us in the third and fourth quarters,” Wesson head coach Candice McDuffey said. “The girls played hard and we will work on our shots to compete in the upcoming games.”

The Wesson Cobras controlled the game from start to finish against the Enterprise Yellow Jackets Friday night with a final score of 64-36.

With the win, Wesson moves to 3-3 on the season and the loss drops Enterprise to 3-4.

“I thought we played well tonight. We moved the ball well offensively and played really aggressive defense,” Wesson head coach Rusty Newman said. “This was a good team win for us and I’m proud of my guys for playing hard and executing.”

Wesson took an early lead and maintained it throughout the game. Sophomore guard Shemar Dickerson was the top scorer of the game for Wesson with 16 points and sophomore forward Jontavius Smith followed up with 10 points. Freshman center Kenner Bizot had a total of nine points and senior guard Will Hulon and freshman guard Darrian Gibson had eight points each. Smith filled the stat sheet, adding 11 rebounds, four steals, one assist and two blocks. Bizot had four rebounds, four steals, and one block. The Cobras shot 12 of 24 from the charity stripe.

For Enterprise, senior Dwayne Pendleton was the top scorer with 14 points and senior Darren Richardson chipped in with six points. Other scorers include junior Ryan Amic and senior Austin Carter with four points each. Pendleton and Richardson contributed on the glass with five rebounds each. The Jackets shot 12 of 26 from the free throw line for the game.

Wesson will host Bogue Chitto on Tuesday with games times starting at 4 p.m. for junior high and 6 p.m. for varsity. Enterprise will participate in the Lincoln County High School Tournament on Saturday, Dec. 10.