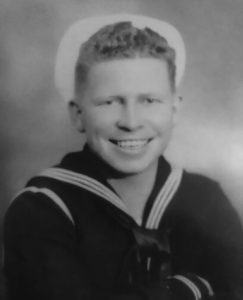 The remains of Fireman 1st Class Jim H. Johnston will be buried Wednesday with full military honors 75 years after the Wesson native was killed at Pearl Harbor during World War II.

The 23-year-old Wesson sailor died along with the other 428 crewmen on board the USS Oklahoma when it was attacked by Japanese aircraft. The Oklahoma, moored at Ford Island, took several torpedo hits and quickly capsized. No single vessel at Pearl Harbor, with the exception of the USS Arizona, suffered as many fatalities.

The funeral home was contacted by the Navy to make the arrangements and owners Clay and Colby McMorris gladly offered their services to the family free of charge.

“Riverwood Family has always put ministry and service first,” Colby McMorris said. “When we had the opportunity to serve this family and offer a service to the United States Navy by taking part in the graveside  service for Mr. Johnston, we thought of it as a once in a lifetime opportunity and privilege. Our heart beat is to help honor his family and help with his homecoming to be placed by his parents in Wesson cemetery.”

McMorris said the community response has been overwhelming.

“It is so encouraging for our community and surrounding areas to see the love that has been poured out for Mr. Johnston because of his sacrifice,” he said. “I do believe this community has really shown a true heart of appreciation for the importance of our freedoms through military service and I love that so many in our community is wanting to show this family how special it is to honor Mr. Johnston, especially after 75 years for his homecoming.”

The public is invited to attend the military funeral, which will begin at 10:30 a.m.

Riverwood will take possession of Johnston’s remains at Jackson International this afternoon and will be escorted back to Brookhaven by the Lincoln County Sheriff’s Office and the Patriot Guard motorcycle club.

Sheriff Steve Rushing asks that since the procession will travel Hwy. 51, those who choose to wave flags as the procession passes do so with extreme care and safety.

In 1941, Johnston’s family in Wesson considered the young man as missing in action. It took several months before it was determined he was killed in action, Springs said. From December 1941 until June 1944, Navy personnel recovered the remains of the deceased crew, which were subsequently interred in the Halawa and Nu’uanu Cemeteries.

Staff Sgt. Kristen Duus with the Defense POW/MIA Accounting Agency, said unidentified remains from the Oklahoma were buried in 46 plots at the National Memorial Cemetery of the Pacific, known as the Punchbowl, in Honolulu. In October 1949, a military board classified those who could not be identified as non-recoverable, including Johnston.

In April 2015, the Deputy Secretary of Defense issued a policy memorandum directing the disinterment of unknowns associated with the USS Oklahoma. Two months later, personnel began exhuming the remains from the Punchbowl for analysis.

The DNA came from Frank Springs, Johnston’s oldest living relative, who had been contacted by representatives from the Department of Defense. Springs, 78, of Lucedale, will be at the service Wednesday with other family members.

Severe thunderstorms capable of producing damaging wind gusts are possible late this afternoon through tonight, according to the National Weather... read more