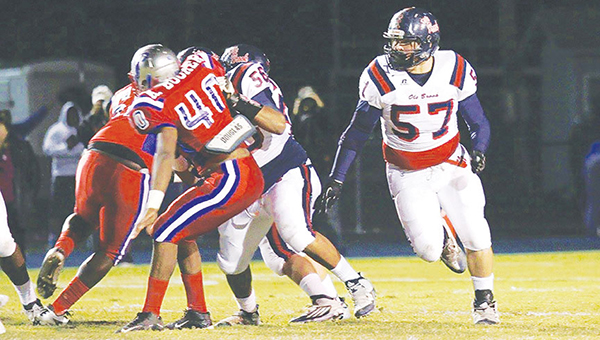 Junior offensive lineman Trace Clopton was named to the Offensive All-State First Team by the Mississippi football coaches for his stellar play on the Panthers offensive line.

“Trace has worked extremely hard to get to this point on and off the field,” Brookhaven head coach Tommy Clopton said. “He led our team in pancake blocks, he became more of a physical blocker, and became better due to his work in the weight room and on the game field. It shows how hard he’s worked.”

Junior defensive lineman Jeffrey Johnson was named to the All-State Second Team as the nose guard and defensive presence of the Panther defense. Johnson had a fantastic season clogging up the middle for the Panther defense, racking up 51 tackles on the season and adding on nine sacks and averaging four tackles per game.

“He’s been a very dominant force in the middle for us all season long and he earned this,” Clopton said about Johnson. “He’s got a very high motor and improved on that greatly from last season. He covers sideline to sideline and that’s great for someone with his size on the defensive line. Our defense improved because of his great play.”

Junior outside linebacker Jordan Blackwell was also named to the All-State Second Team by the Mississippi football coaches. Blackwell was all over the field for the Panther defense at linebacker, totaling 86 total tackles, 64 of them solo tackles, three sacks and averaged just over seven tackles per game.

“Jordan moved around a bit to find the right spot for him and for our defense and he ended up finding a nice home at linebacker,” Clopton said about Blackwell. “He made the calls for our defense all season long and he had a knack for finding the football and making tackles when needed. He improved dramatically and was a great player for our defense.”

Adding on to the good news for the Brookhaven Panthers’ football team, Clopton and Johnson, along with junior defensive back Jemaurian Jones were invited to participate in the 2017 national combine for the U.S. Army All-American Bowl Jan. 5-7 at the Alamo Dome in San Antonio, Texas.

The combine attracts some of the best underclassmen football players from all across the country and puts the players through exercises and drills in hopes to possibly participate in the Army All-American game in the future.

While the invite to the combine for three players is an individual achievement, coach Clopton gave credit to the team for these accomplishments.

Opinion: Big week of basketball is coming in Lincoln County

Dylan Rubino December is here and all the grit and shine from the football field is long gone. It’s time... read more