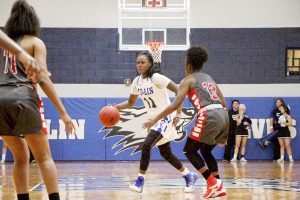 Photo by Co-Lin/The Lady Wolves’ Brittany Rose tries to get past a Jones player Monday night.

ELLISVILLE – The Copiah-Lincoln Community College Wolves were unable to hold off the Bobcats late in the game Monday as Jones defeated Co-Lin 106-85.

The Wolves played tremendous basketball in the opening half of play, but Jones’ ability to hit the three-ball was Co-Lin’s downfall. The loss moves the Wolves to 4-4, 0-1 on the year.

“It was a pretty good game on the offensive end,” said head coach Kenny Bizot. “Our plan was to get back and make sure our defense was set. We just didn’t do that in the second half.”

The Wolves came out firing in the opening minutes, led by freshman Darrian Wilson. Co-Lin led by seven points after just three minutes of play. The Bobcats rallied and responded with a quick 8-0 run to take their first lead of the game with 14:58 remaining in the first half.

Co-Lin once again took the lead after back-to-back threes from Wilson. The Bobcats refused to go away as they tied the game for the fifth time with just 5:29 remaining in the half. Action was back and forth in the final minutes of the half with the Wolves up three, 49-46 going into the locker room.

In the second half, the Bobcats could not miss. Jones quickly erased the Wolves three point lead and pulled away after a 7-0 run. In the final 10 minutes of action Jones continued to extend their lead with lights out shooting. The Bobcats netted 60 points in the second half to Co-Lin’s 36.

Rickey Holden led the Bobcats in the scoring column with 23 points, seven assists, and seven rebounds. David Davis added another 13 points and Leito Halloway put in an additional 12 points.

“We played great defensively, especially early in the game, and that allowed us to build a lead,” said head coach Gwyn Young. “We rebounded well, and just executed.”

The Lady Wolves quickly took the lead in the first quarter of play after a 5-0 run to start the game. Co-Lin extended that lead to as many as 12 late in the quarter. The Lady Bobcats tied the game at 17 early in the second quarter after four consecutive baskets. The Lady Wolves responded with a small run of their own led by Tenazhia Hinkson and Brittany Rose to regain the lead.

In the second half, Co-Lin continued to play well on both ends of the floor as the team was finding baskets from the paint, mid-range, and beyond the arc. Defensively the team showed great presence as they held the Lady Bobcats to 40 points.