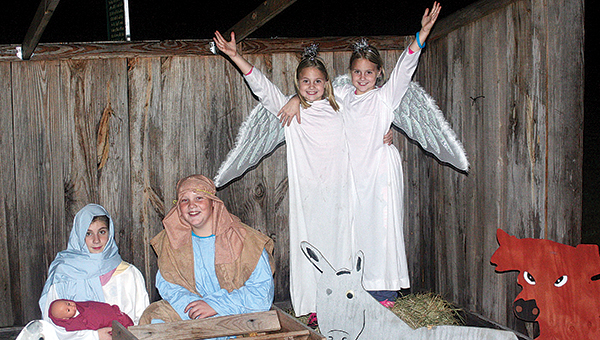 New Sight Baptist Church’s live nativity started 11 years ago just like it did over 2,000 years ago, with Mary and Joseph in a stable with a baby.

So many people visited the church the first year, they expanded the scene a bit and the attraction grew.

“The following year we blossomed with it,” organizer Brenda Foster said.

The drive-thru nativity will be open Dec. 16-18 from 5:30-8:30 p.m. It has grown to include scenes of Jesus’ life from the angel Gabriel fortelling Christ’s birth to Mary through his resurrection at Calvary. This year, they’ve added a church scene, which was featured on the New Sight float in the Brookhaven Christmas parade. “Our plans are to add to it every year until we run out of room,” she said.

New Sight includes the many scenes from Jesus’ life because each is as important to the Christmas story as the others. “He was born for us but also died on the cross for us,” she said.

Viewers can drive through the scenes and see the whole thing in about 20 minutes, though Foster said visitors are welcome to get out and ask questions.

Each of of the scenes has the Bible verse to it and what it means.

More than 2,300 people were part of the three-night procession that circles the church grounds last year. This year the nightly procession begins an hour earlier and will run for three hours each night, Foster said.

About 130 people including the 70 cast members are part of the program which also includes live animals. They’ll have llamas, a donkey, sheep, goats and chickens, she said. One year they even had a camel, but since the petting zoo she borrowed it from has closed, Foster will settle for a wooden camel instead.

It’s a huge undertaking, but one the church is happy to take on to be able to minister to the community. “It’s a gift to the community to let them know what the true meaning of Christmas is,” she said. “If just one or two people come to know Christ because of it, it’s a blessing.”

There’s only one week left to make a contribution that could put food on the table for several Lincoln County... read more