The final day of the Lincoln County basketball tournament kicked off Saturday afternoon at Loyd Star High School as Enterprise and West Lincoln girls opened the final day of play. 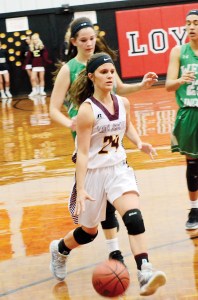 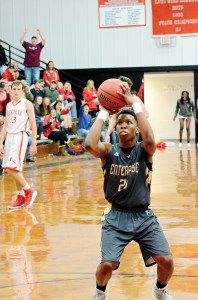 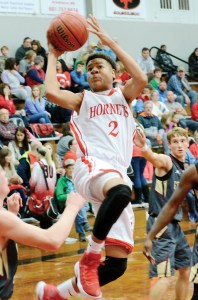 Trey Lyons (2) finishes at the rim Friday night against Enterprise. 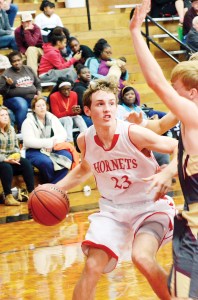 Dane Smith (23) drives to the hole Friday night against Enterprise.

It was a sloppy offensive game for both schools through the first three quarters, but Enterprise pulled away in the fourth quarter, picking up their second win of the tournament, beating West Lincoln 39-27.

With the win, Enterprise moves to 9-1 on the season and drops West Lincoln to 3-8.

Defense was key for the Enterprise Yellow Jackets as they held West Lincoln to only 11 points in the first half, leading 16-11 at halftime.

With Enterprise leading 19-15 at the end of the third quarter, the Yellow Jackets would score 20 in the fourth to put the game out of reach.

Bogue Chitto picked up their first win of the season on a game winning three-pointer and Enterprise picked up a last second win thanks to a made free throw with five seconds left in the game.

Bogue Chitto had three players score in double figures to lead the team. Senior Taneshia May led the Lady Bobcats in scoring with 15 points, senior Terrah Nelson chipped in with 13 points and senior Chyna Collins had 11 points.

West Lincoln stayed in the game thank to a great performance from sophomore forward Skylar Hall. Hall led the Lady Bears with 19 points on six three-pointers on the game.

Freshman forward Josh Thomas drained a three as the buzzer sounded to give Bogue Chitto their first win of the season against West Lincoln 46-45.

It was the only shot attempt of the night for the freshman, but he made it count, putting his team in the win column.

“Trailing entering the fourth quarter, Bogue Chitto needed to lock down on defense to keep the game in reach and they did just that, outscoring West Lincoln 14-6 in the quarter to give them a chance to win.

Coach Pitts was happy with how his team fought all season despite not winning a game, but that changed Friday night as the hard work finally paid off.

In a battle of undefeated teams, it was the Loyd Star Lady Hornets that came out on top in dominating fashion, winning 64-28 over Enterprise Friday night.

“They played really well tonight, but at the same time, we turned the ball over way too many times early in the game,” Loyd Star head coach Gene Britt said. “Their hustle was great, and our defense was great the entire game.”

Defense was key for the Lady Hornets as they held Enterprise to only 12 first half points, making it a steep hill to climb for Enterprise the rest of the game.

Loyd Star didn’t let up the rest of the game as they kept their foot on the gas and coasted to an easy victory.

It was a convincing win for Loyd Star as they pick up another dominating win in the tournament.

It was a sloppy, turnover-filled first half for both teams, but it picked up in the second half, capped off with an exciting finish as Enterprise came out on top with seconds remaining by a score of 35-34.

With the game tied at 34 with under a minute, Loyd Star wanted to hold the ball for the game-winning shot, but senior guard Dwayne Pendleton stole the ball and was fouled on a fast break layup attempt with five seconds left in the game. The senior missed his first free throw attempt but drained the second one, lifting his team to the 35-34 victory.

“Dwayne is a big part of what we do,” Enterprise head coach Shane Adams said. “He stepped up big for us and made that free throw. We’re happy to have him on our side.”

Pendleton started off slow but picked up the scoring in the second half, scoring 19 points on the game.

The first half was sloppy for both sides, with Loyd Star leading 13-10 at halftime. Enterprise would make a scoring run at the end of the third quarter to take a 24-23 lead heading into the fourth quarter.

The fourth quarter came down to the wire, but it was a hard fought game from both sides that proved either team was worthy of being a winner.

“I’m thrilled with the teams effort tonight,” Loyd Star head coach Gene Britt said. “Our defense played great and kept them off balance all night. Just couldn’t get it done in the end.”

“It’s huge for our team,” Adams said of the victory. “We made goals before the season and playing well in the county tournament was one of them. It’s really big of the kids because the tournament means something to them. It’s a big deal for them.”

Area veterans and their families, as well as anyone with a patriotic spirit, are encouraged to attend a wreath-passing ceremony... read more