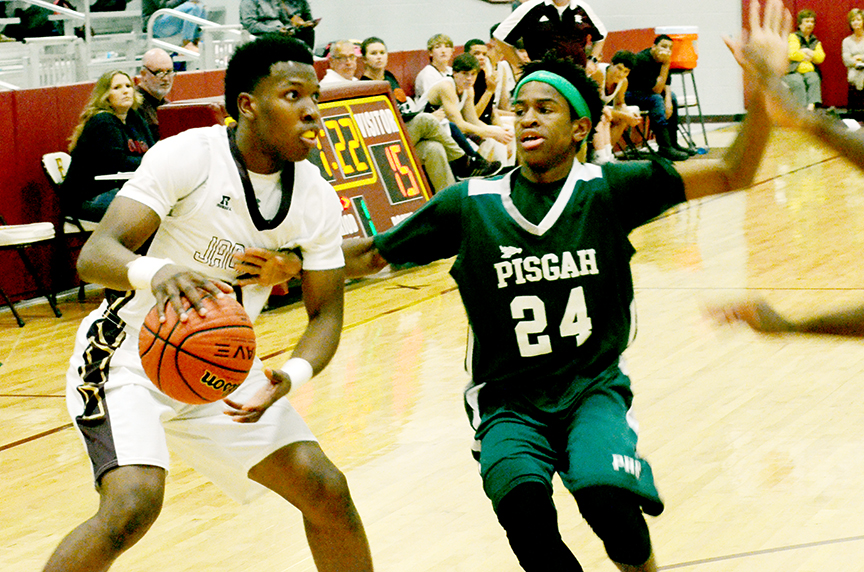 Photo by Dylan Rubino /Dwayne Pendleton (23) steps back from the defender Tuesday night against Pisgah.

It was a physical dogfight from start to finish, but Enterprise got the buckets and defensive stops necessary to pull away in the fourth quarter against Pisgah Tuesday night and won 56-47.

With the win, the Yellow Jackets extend their winning streak to four games, continuing their streak from the Lincoln County tournament, and move to 7-4 on the season.

“I’m really proud of the kids and really proud of their effort down the stretch, especially as physical as the game got,” Enterprise head coach Shane Adams said. “We’ve got this team again Friday night and I’m looking forward to another good game.”

It was a sloppy start to the game for Enterprise as Pisgah scored in the paint and dominated the glass, taking a 17-12 lead at the end of the first quarter.

Junior center for Pisgah Damien Watson took control of the game in the second quarter, scoring 10 of their 10 points, leading the Dragons to a 29-26 halftime lead over Enterprise. Watson would finish the game with a game-high 24 points.

It was an up and down, entertaining third quarter that ended with a bang. Down two with seconds winding down, senior guard Darren Richardson drained a half court buzzer-beating three to give Enterprise a 42-41 lead heading into the fourth quarter.

“That was huge for us,” Adams said. “It gave us a little momentum heading into the fourth quarter. We built on that and it carried us into the fourth.”

It was all Enterprise in the fourth quarter, as they held Pisgah to only six points in the quarter and got the rebounds and made the free throws necessary to pull out the victory.

While Watson dominated in the first half for Pisgah, Enterprise clamped down on him in the second half, holding the big man scoreless in the fourth quarter and limited his touches.

It was an all around effort from Enterprise, as three players scored in double figures. Senior guard Dwayne Pendleton continued his great play, leading his team with 18 points. Senior Toby White scored 16 points for the game, 13 of those in the second half and senior Austin Carter chipped in with 10 points.

“We had a lot of kids step up for us tonight and I couldn’t be more proud of them,” Adams said.

Enterprise started the game slow, but turned on the gas in the second quarter and finished the game strong with a convincing win over Pisgah 47-32.

With the victory, the Enterprise Lady Yellow Jackets move to 10-1 on the season.

“I saw a lot of hustle from our team tonight,” Lady Jackets head coach Jill Nations said. “I saw them maintain their composure and finish strong whenever the game got physical. We set some things up and did some things right.”

It was a rough first quarter for the Yellow Jackets as they trailed 8-7 at the end of the quarter. The quarter was filled with turnovers and missed shots for Nations’ squad and put them in a hole early.

It was more of the same in the third as Enterprise outscored Pisgah 15-4, taking a commanding 37-18 lead into the final quarter.

“We took a lot better shots in the second quarter on and made a lot of the easier shots,” Nations said. “Our shot selection got better as the game went on.”

Pisgah would put up a fight in the fourth, opening on a 12-2 scoring run to start the quarter, cutting the Enterprise lead to only nine. From there on out, the Lady Yellow Jackets got stops necessary to pull away and win handily.

The Brookhaven Academy Cougars and Lady Cougars faced off with the Tri County Rebels Saturday afternoon and picked up wins... read more