Individuals with medical conditions that require injections can drop off their needles at Guy’s Pharmacy and LaRue’s Discount Drugs, both in Brookhaven.

The disposal service is provided at no charge.

“There are a lot of different things that people do at home that they get from the pharmacy. It is important for everyone to be educated to know how to properly dispose of them,” said pharmacist Laura Broxson at Guy’s.

Broxson said the staff at Guy’s is happy to provide a location for people to drop off their disposals.

Individuals can dispose of their needles in thick containers like laundry detergent jugs, sports drink bottles and bleach. There is currently no law prohibiting the disposal of syringes in garbage bags, but the Mississippi Department of Environmental Quality says it’s unsafe to do so. This practice poses a potential risk of needle stick injuries for garbage collection employees, sewage treatment plant workers, janitors, and in some cases the general public.

“We fill our containers up with the vaccination needles, too” said LaRue Baker, owner of LaRue’s Discount Drugs. Baker understands the importance of proper disposal and will do anything to help inform others. “It’s all about customer care,” Baker said.

Syringe disposals, also known as sharps, cannot be able to penetrate when people drop them off. Pharmacists are not allowed to touch any needles or take disposals in anything except closed containers for safety purposes. Both pharmacies aim to inform their customers on the importance of proper disposal. “We even have pamphlets and a syringed-approved sticker outside of our pharmacy” said Racheal Guy, a pharmacy technician at Guy’s.

The goal of the program is to avoid the risk of someone getting infected by improper syringe disposal.

“Anytime you have needles that aren’t disposed of properly, it becomes a community health hazard. It’s also easy [for anyone] to get transmitted diseases. The proper disposal of needles can help avoid that,” said David Culpepper, spokesman for King’s Daughters Medical Center. 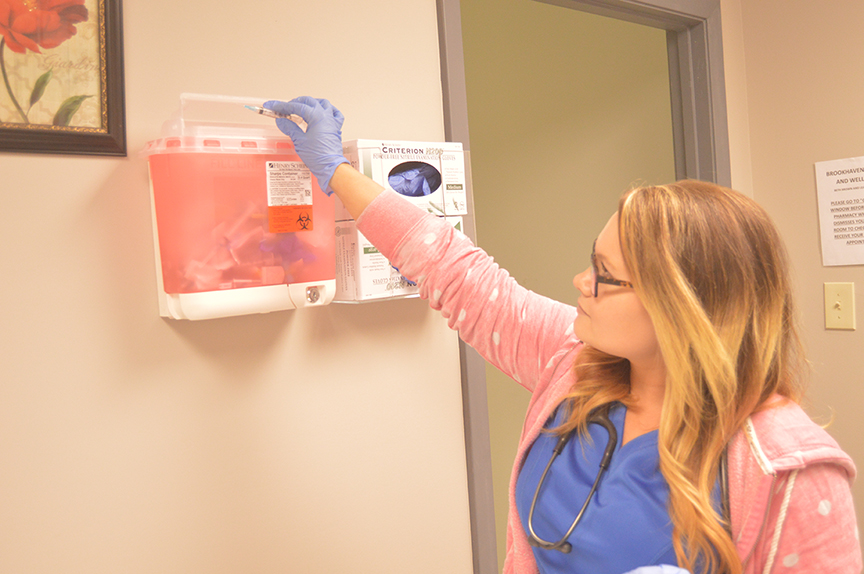 Photo by Orionna Brumfield/Kimberly Forman disposes of a needle after giving a patient a shot.

One day left to donate to holiday food pantry drive

Friday is the last day of the Bank of Brookhaven and The Daily Leader’s annual Holiday Food Pantry Drive. Donations... read more