The first ever valedictorian of Jackson State University’s School of Journalism and Media Studies has joined the newsroom at The Daily Leader. 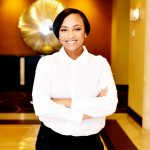 The 22-year-old graduated from Brookhaven High School with honors in 2012 and was followed three years later by her baby sister Shana Brumfield. She is the daughter of Dontray and Jenice Williams of Brookhaven.

She received an associate’s degree from Hinds Community College in Raymond, where she went to school on both band and honor scholarships. She found her love for journalism during her sophomore year after doing a presentation on her role model, Mississippi native Oprah Winfrey. She earned a full scholarship to attend JSU, where she received a bachelor’s degree in mass communications. She also served as editor of Jackson State’s Experience Magazine her senior year.

Brumfield spent the entire summer after graduation working for iGN Public Relations, LLC, from her home office in Brookhaven and in the Atlanta, Georgia, office.

She hopes to make a positive impact at the newspaper with her writing.

“I am very happy to be a part of The Daily Leader team,” Brumfield said. “I have a great feeling that my love for writing will grow deeper with this position.”

“I’m very excited to have Orionna join us at The Daily Leader,” said managing editor Donna Campbell. “She is very focused and detailed-oriented and will undoubtedly be an asset to our newsroom.”

Campbell said Brumfield’s knowledge of the community will also be a plus.

“Orionna knows Brookhaven and has a great understanding of what makes this city and county special,” she said. “She’ll be telling the stories of the people here and I’m looking forward to reading them. I’m sure our readers will, too.”

Call or email Brumfield with news tips and story ideas, or just to say hello. She can be reached at 601-265-5306 or at  orionna.brumfield@dailyleader.com.

Individuals with medical conditions that require injections can drop off their needles at Guy’s Pharmacy and LaRue’s Discount Drugs, both... read more