Wesson comes back against Loyd Star

The Wesson Cobras squeaked out a win against the Loyd Star Hornets Tuesday night after battling the entire game by a final score of 67-62.

“A win is a win and I’ll gladly take it but I feel like we laid back defensively for most of the game,” Wesson head coach Rusty Newman said. “We allowed them too many open shots and they took advantage of that but overall, I’m proud of my guys for finding a way to come out on top in the end.”

The Hornets led the entire game, but the Cobras rallied in the fourth quarter to tie the game with a three-point shot by freshman Kenner Bizot. Loyd Star junior forward Patrick Price came back with a basket and the foul to take the lead back for Loyd Star. Wesson would respond with two free throws by senior guard Will Hulon.

Sophomore guard Shemar Dickerson was the top scorer for Wesson with 20 points and added four steals and three rebounds. Sophomore forward Jontavious Smith scored 16 point and added 12 rebounds and two steals on the game. Hulon helped with the scoring with 12 points and Bizot with eight points. The Cobras shot 19-36 from the free throw line.

“Free throws were key to Wesson winning,” Loyd Star head coach Gene Britt said.  “We had 3 good quarters with the kids playing hard.  We made 11 three-pointers, but miscues at crucial times hurt us. We also got in foul trouble but we are getting better and will work toward winning district.”

The Loyd Star Lady Hornets added another win to their resume against Wesson by a final score of 46-22.

“The girls played good defense but on offense they missed too many easy shots under the goal but we had enough to hold a lead,” Loyd Star head coach Gene Britt said. “Lots of players got some playing time and we need to keep working over the holidays to finish the second half of the season. The girls are getting better and better every ball game.”

Loyd Star held their wide lead and finished the game by a score of 46-22.  Smith was the top scorer of the game with 16 points, adding 15 rebounds and five steals as well. Britt chipped in 11 points and five rebounds on the night. Other top defensive players for the Lady Hornets were Katie West with eight rebounds and Faith Bergeron with three steals. The Lady Hornets shot 7-11 from the free throw line.

“Defensively, we played well and kept them from scoring like they wanted to but on offense, we couldn’t get anything going and we had too many turnovers,” Wesson head coach Candice McDuffey said.

For the Lady Cobras, the top scorer was senior guard Aurianna Vaughn with five points.  Alayshia Mims scored four points and both Shelbi Maxwell and Jernesha Edwards put up three points each. The Lady Cobras did not shoot well from the free throw line, going 5-19 on the night. 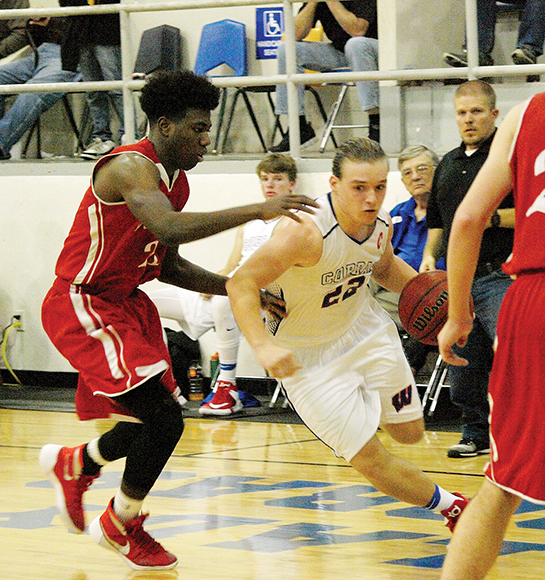 Photo by Dylan Rubino /Dwayne Pendleton (23) steps back from the defender Tuesday night against Pisgah. It was a physical... read more