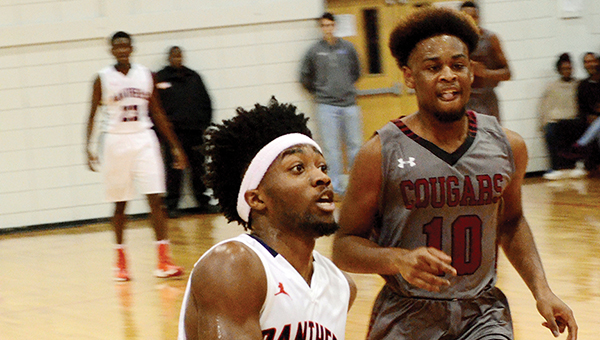 Thanks to the heroics of senior leaders Denarius Gray and Damarius Brooks, the Brookhaven Panthers fought until the end and came away with their best win of the season Friday night, defeating Lawrence County 66-64 in overtime.

With the victory, the Panthers move to 8-3 on the season heading into Christmas break.

“Our team played with heart and determination tonight,” Brookhaven head coach Jimmie Butler said. “During the second half, we made perimeter shots that were missed during the first half.”

With Brookhaven leading 16-12 at the end of the first quarter, Lawrence County would dominate the following quarter, outscoring the Panthers 14-5 to give the Cougars the 26-21 going into halftime. The Panthers had a lot of open looks in the second quarter, but could not get the shots to fall.

With Lawrence County leading 37-31 heading into the fourth quarter, Brookhaven would need to start hitting those open looks that they couldn’t hit in the first half and they did just that.

Trailing with just under three minutes left, junior guard Richard Marshall would drill two straight three-pointers to give Brookhaven the lead. Lawrence County would follow with trips to the free throw line to give the Cougars the lead late.

With seconds on the clock remaining, senior point guard Denarius Gray pulled up from behind the arc and drilled a three to tie the game at 56 and send it into overtime.

“At one point during the game, we were down 12 points,” Butler said. “Going into overtime gave us the extra time needed for the momentum to shift our way.”

The overtime period would come down to the wire as well. With Brookhaven trailing by two with just under 10 seconds left, Damarius Brooks sized up his defender and drilled the three from the left side of the court to give Brookhaven the lead. Marshall would steal the inbounds pass from Lawrence County and make both his free throws to extend the lead and ultimately give the Panthers the thrilling victory.

The Panthers has a hard time stopping senior center Keyshawn Feazell from Lawrence County, who finished the game with 31 points and 14 rebounds. The Mississippi State signee garnered high praise from coach Butler.

“Defensively, we didn’t have an answer for Feazell,” Butler said. “He’s a great kid with a big future. Guarding him was a great experience for our young post players.”

The win gives Brookhaven much needed momentum heading into the break before they head to the West Jones Tournament on Dec. 29.

It was a sloppy start for the Lady Panthers in the first half, but they turned it around in the second half, coming all the way back to take the 46-42 victory against Lawrence County Friday night.

With the victory, Brookhaven moves to 4-8 on the season heading into Christmas break.

“It’s really a big win for our team,” Brookhaven head coach Preston Wilson said. “We’re still a young team and still making a lot of mistakes. We’re only getting better and hopefully keep going in that direction.”

Turnovers and missed free throws killed in Brookhaven in the first quarter, trailing Lawrence County 14-3 at the end of the first.

Sophomore point guard Shania Harris sat most of the second quarter due to foul trouble, as Lawrence County took a 26-15 lead into halftime. It was a decision Wilson had to make in order to keep his best player out of foul trouble and fresh for the second half.

“We didn’t want her picking up a third foul going into halftime,” Wilson said. “If she only has two fouls going into the third quarter, she can play with two. That was important for us.”

The Lady Panthers would cut the Lawrence County lead to 33-31 heading into the fourth quarter.

Key defensive stops and timely shots down the stretch would ultimately give Brookhaven the comeback win over Lawrence County.

Sophomore center Tamia Stallings would have a big impact on the game for Brookhaven, finishing with a team high 17 points. Harris would finish the game with 16 points, 10 of them coming in the fourth quarter.

Thanks to a three-pointer in the final seconds by freshman forward Kenner Bizot, the Wesson Cobras stole the win over... read more