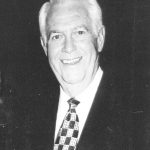 Visitation will be Tuesday, Dec. 20, 2016, from 5 until 8 p.m. at Monticello United Methodist Church and will continue Wednesday, Dec. 21 from 9 a.m. until time of service at the cemetery.

He graduated from Monticello High School and Hinds Junior College and attended Southern and Brookhaven College, Dallas, Texas.  During his working days, he worked for American Cyanamid a diversified chemical company out of Wayne, New Jersey for 34 years.  He was a faithful member of Monticello United Methodist Church, serving in many levels of the church.  He served his country with pride and honor during the Korean War and graduated from military leadership school as the head of his class and reached the rank of sergeant first class. He was a member of Lawrence County Chamber of Commerce Service Club, CrimeStoppers and the Civic Center Board of Directors. He was curator and director of the Lawrence County Military Museum, Regional Mississippi Housing Authority Board of Directors and Georgia Pacific Community Development Association.

Along with his wife and Martha Watts, he established Cooper’s Ferry Park, which he’s maintained since 1993. He also administrated the Good Samaritan fund and Habitat for Humanity and organized “Meals on Wheels” for Lawrence County.

Preceding him in death were parents; one brother, Bill Bufkin, and one sister, Ann Seibold.