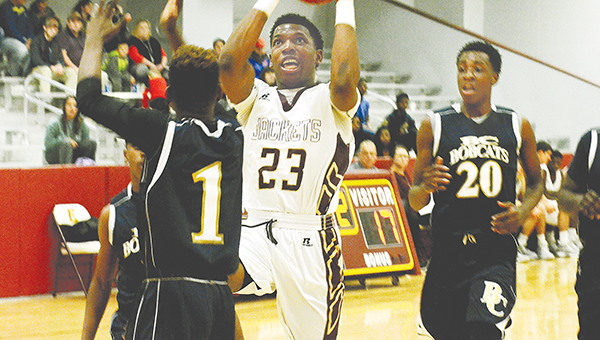 Enterprise’s Dwayne Pendleton, No. 23, drops the floater in the lane Monday night against Bogue Chitto. The Yellow Jackets won 52-46.

Thanks to the heroics of senior guard Dwayne Pendleton, Enterprise won a seesaw battle Monday night in overtime against Bogue Chitto with a final score of 52-46.

With the win, Enterprise moves to 8-5 on the season and the loss drops Bogue Chitto to 2-11.

With just under 10 seconds left in regulation and Bogue Chitto leading 44-41, Pendleton gathered the inbounds pass and raced up the right side of the court. He pulled up from the three-point line and rattled home a three that took a lucky bounce to tie the game and send it to overtime.

It was a very sloppy game filled with turnovers for both teams. The Yellow Jackets seemed to hold a slim lead through the majority of the game with the Bobcats always hanging around and fighting. The size and athleticism kept Bogue Chitto in the game with rebounding and second-chance points.

The Bobcats of Bogue Chitto would take advantage of their size in the second to create easy shots and take the lead late in the fourth quarter.

“I thought we did a good job on their bigs in the first half. In the second half, they were able to get the ball down low and score,” Adams said. “They really played hard and never quit.”

“Coach Pitts does a really good job with those kids and he’s really building a good program there,” Adams said. “I have all the respect in the world for him.”

Pendleton was the player of the game, scoring 25 points on the night with 17 of them in the second half and overtime. Junior forward Cade Feltus chipped in with 13 points as well for the Yellow Jackets.

Sophomore center Malik Richardson led Bogue Chitto in scoring with 12 points on the night and eighth-grade forward William Allen chipped in with 10 points.

Winning a game against a school that’s six miles away is important for coach Adams and hopes it gives his team momentum heading into Christmas break.

“It’s always good to get a win against a county rival,” Adams said. “The kids really look forward to it and it’s important to the community. We’re just happy to get the win.”

It was an eight-point lead for Bogue Chitto at the end of the first half, but the Lady Bobcats blew the doors open in the second half, cruising to a 59-53 win against Enterprise. With the win, Bogue Chitto moves to 5-7 on the season and the loss drops Enterprise to 11-2.

The third quarter was a dominating performance for the Lady Bobcats as Bogue Chitto outscored Enterprise 23-8 in the quarter to put the game out of reach.

Senior guard Terrah Nelson seemed to be everywhere on the court for Bogue Chitto. Nelson had a game high 20 points on the night and senior forward Taneshia May helped the scoring load as well with 18 points. Senior forward Michelle Herrington led Enterprise in scoring with 13 points.