The Brookhaven Academy Cougars and Lady Cougars faced their rivals down in McComb as the Parklane Pioneers came to the John R. Gray Gymnasium Friday afternoon. 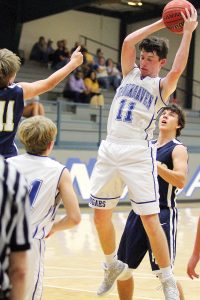 Photo by Sherlyn Evans/Colton Watson (11) goes up for the rebound Saturday afternoon against Prentiss.

The Lady Cougars (9-5) traded the lead with the Lady Pioneers for four quarters in a game of momentum swings with the visitors prevailing by two points 45-43. Jana Case led BA for the game with 23 points and 10 rebounds. Sissy Byrd added 12 points in support. Carrington Jeffcoat led Parklane with 16 points.

The BA Junior Varsity Lady Cougars (12-3) didn’t have enough in the tank, falling to Parklane 31-24. The Lady Cougars tied the game late at 23, but a late run and clutch free throw shooting gave the Lady Pioneers the victory. Julianna Crosby led the Lady Cougars with nine points for the afternoon.  AB Warren followed with seven points. Nan Gatlin led Parklane with 13.

The BA JV Cougars (13-1) overcame a slow start, trailing by seven points at halftime, and flipped the switch in the second half and won the game 45-34. Tyler Fortenberry led all scorers with 16 points for the game. Britton Nelson chipped in 15 points and Trey Fortenberry added 10 in support.  Mason Alford had nine to lead Parklane in scoring.

The Cougars and Lady Cougars faced off against the Prentiss Christian Saints Saturday afternoon. The home team picked up wins in both varsity boys’ action 64-30 and varsity girls by a score of 55-15.

The Lady Cougars (10-5) had a strong performance Saturday afternoon with a 25-point first quarter scoring effort and never looked back. Anna Michael Smith led the way for the Lady Cougars with 14 points. Jana Case added nine points and Sissy Byrd chipped in with seven points. Despite only scoring 15 points, the Lady Pioneers had 10 players contribute in the scoring column.

The BA JV Lady Cougars (13-3) came out on fire early and cruised by the Lady Saints by a score of 40-12. Emily Claire Felder led the way for BA with 11 points followed by AB Warren with 10.

Cop’s best beat is in a classroom

Photo by Orionna Brumfield/Officer Fred Daniel divides his time between the Brookhaven Police Department and as a teacher at Lipsey... read more