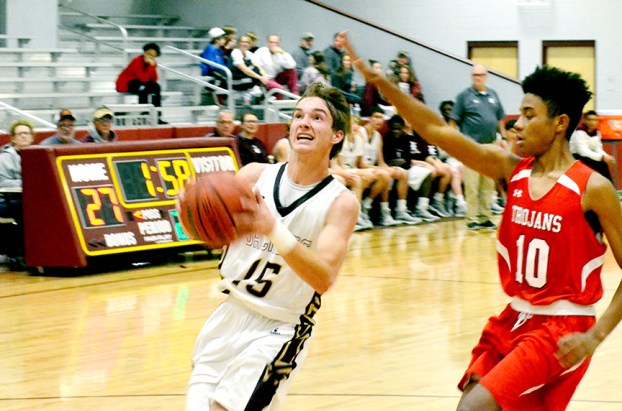 Photo by Dylan Rubino/Zach Hodges (15) drives past the defender for the layup Tuesday night against West Marion.

Senior guard Adrian Miller scored 37 points in the victory for West Marion a month ago.

This time around, Miller was held to 11 points and scoreless in the second half as Enterprise played a stellar defensive game en route to the 50-37 win Tuesday night. The win moves the Yellow Jackets to 8-5 on the season heading into Christmas break.

“Defense was the key for us in the basketball game,” Enterprise head coach Shane Adams said. “All five of our kids did a really good job on defense. That team is athletic and hard to stop.”

With Enterprise leading 13-9 at the end of the first quarter, the Yellow Jackets took control of the second quarter and outscored West Marion 20-11 to take a 33-20 lead into halftime.

West Marion would outscore Enterprise 12-4 in the third quarter to trail by five entering the fourth quarter.

The defense in the fourth quarter would put the game away, as the Yellow Jackets held West Marion to five points in the quarter to seal the victory.

“We came out really flat on offense and defense in the third quarter,” Adams said. “We got a little complacent because of the lead we had. The fourth we did a way better job especially defensively. That won the game for us.”

Senior guard Dwayne Pendleton shined once again for Enterprise, scoring a game high 33 points and dominating the game on both ends. Senior forward Zach Hodges chipped in with eight points on the night, all of them coming in the first half.

Senior forward Stacy Brown was the only other player to score in double figures for West Marion with 10 points for the game.

With back-to-back games for Enterprise, the Christmas break comes at the right time as the team looks to regroup and get some fresh legs heading into the second half of the season.

“The kids are out there working their tails off and they’re exhausted. We need a break, mentally and physically,” Adams said. “We’re happy with our record and where we are right now, but we know everything is in front of us.”

After a tough loss the night before against Bogue Chitto, Enterprise came out firing Tuesday night against West Marion and cruised to a 52-30 win. With the victory, the Lady Jackets move to 12-2 on the season heading into the break.

“We played a little more aggressive tonight than we did last night,” Enterprise head coach Jill Nations said. “Losing two of our starters, we’re still trying to find our way. I did see more aggressiveness tonight and I’m happy with that.”

Enterprise dominated the game from the opening tip, taking a commanding 17-2 lead at the end of the first quarter. A 27-10 lead at halftime would prove to be too much for West Marion to overcome, as Enterprise would coast to the victory.

After back-to-back games with two completely different results, the break comes at the right time for Enterprise as players are banged up and look to get healthy.

“Everybody is a little tired and banged up,” Nations said. “We’ve got to be ready coming back to get started with district. We’re looking forward to it.”

Thanks to the heroics of senior guard Dwayne Pendleton, Enterprise won a seesaw battle Monday night in overtime against Bogue... read more