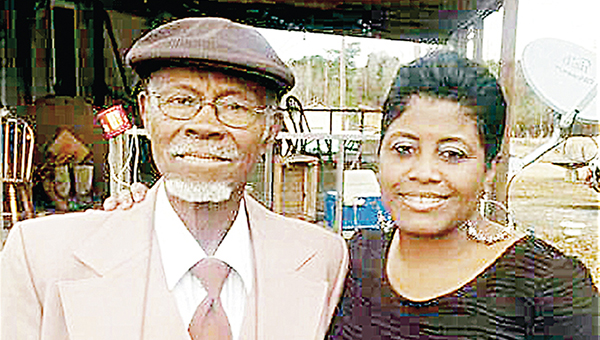 Photo submitted/Marshall “Sco” London, of Brookhaven, wants to know who killed his daughter, Bridget London Hall, before he dies. The family is adding $4,000 to the reward for information that leads to Hall’s killer’s arrest, bringing the total to $6,000.

The family of a Brookhaven woman slain in front of her children in July 2015 is pledging $4,000 to be added to the CrimeStoppers’ reward of $1,000 already offered for information leading to the arrest of the person responsible for her death.

Brookhaven Police Chief Bobby Bell is also adding $1,000 of his own money to the pot to bring the total reward to $6,000 to find Bridget London Hall’s killer.

“We want justice for Bridget,” said her sister, Sharon London, of Birmingham.

Hall, 43, was shot multiple times at close range in her home on Vivian Merritt Street that summer. Her children were home with her when she answered the knock at the door around 11 p.m. and found her killer there.

“We know the player and we know what happened,” London said. “We know there are people who know the truth.”

Hall’s family is not wealthy, but family members have contributed to the reward. Friends of Hall’s in Brookhaven also pledged money to it. “We’re willing to do whatever it takes to get justice for Bridget,” she said. “We just want closure. We want justice and I don’t think that’s nothing less than what she deserves.”

London said she’s both sad and angry that those who know the truth haven’t come forward. She hopes that increasing the reward for information may give someone an incentive for sharing valuable information with law enforcement. “There’s no dollar amount you can put on Bridget’s life,” she said. “Say something so we can connect the dots. Let’s get it over with. We know people know. We’re not rich people. The only thing we’ve got is our name and that’s because of our mother and father.”

Hall was at home on one sofa, watching television with her 14-year-old son, who was on the other sofa. Her youngest daughter was in her bedroom. Her older daughter was outside in the driveway talking to a friend.

“She answered the door and whoever started shooting,” Sharon London said.

Her death came scarcely 24 hours after the fatal shooting of Kelcay Anthony Humphrey, 25.

According to a March 19, 2016, report in The Daily Leader, a bystander on the scene the morning after Hall’s murder said the shooting happened around 11 p.m. He said he saw two men fleeing the scene headed toward North Jackson Street, one riding a bike and one on foot.

Claudis D. Montgomery was charged with murder in Humphrey’s death the next day. Montgomery’s brother, Claude, was Hall’s boyfriend.

London believes her sister’s death was a warning to someone else. She thinks she died in retaliation for Humphrey’s death.

Hall, 43, was the youngest of 12 children born to Marshall “Sko” London and his late wife, Inez. Her mother has passed away, but her 84-year-old father hopes to see her killer brought to justice before he dies, too.

Hall often sang praises at Damascus M.B. Church and received numerous requests to sing at weddings and funerals. She was a popular cheerleader at Brookhaven High School, where she was football homecoming queen her senior year.

“She was well loved,” Sharon London said. “Not just by her family, but by the people here.”

She was working as a phlebotomist at a Brookhaven doctor’s office when she was killed.

Brookhaven Police Capt. Clint Earls said the case will remain open until justice is served. “The investigation will stay ongoing as long as it takes,” he said. “It will never be closed until we get a resolution.”

Earls urges anyone with information to call CrimeStoppers at 601-823-0150. Tips could lead up to a $6,000 reward if the information results in an arrest. Callers can remain anonymous.

Indictments include shooting into a dwelling and burglary

Indictments from previous Lincoln County grand jury sessions through 2016 have recently been served, including several for burglary and shooting... read more