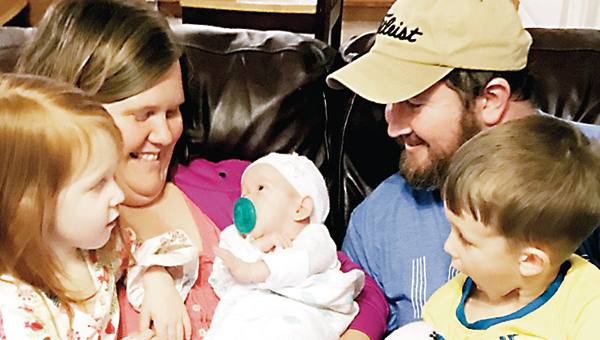 A baby changes everything. But in this case, she really didn’t.

Nathan and Lori Ann Case have unshakeable faith, and though their baby’s first few months have been touch and go, that faith never faltered. It never changed.

Avalyn Grace Case came into this world a bit earlier than expected, born at 33 weeks on Sept. 8.

The Cases, who were high school sweethearts, lost their first child in 2009. Lynley Ann Case was stillborn at 23 weeks.

That’s when the Cases were told that Lori Ann had an incompetent cervix which caused her to go into labor too early. When she got pregnant again, she had a procedure done called a cerclage, or a stitch, to keep her cervix closed until it was time for delivery.

John Tate Case, who’ll be 5 Wednesday, was born on time, but had some breathing issues that came from two collapsed lungs. He needed chest tubes inserted to survive.

Eleanor Rose, the feisty redhead who just turned 3, came when she was due and had no health problems.

“She’s been a redhead ever since she was born,” her father said of the toddler with attitude they call Ella Rose.

She was due in October. Lori Ann was having some problems with blood pressure, then her father-in-law, John Royce Case, was admitted to St. Dominic’s Hospital with heart problems.

When she learned he died, her blood pressure spiked. Her doctor put her on bed rest, but Ava Grace didn’t want to wait.

Lori Ann called Nathan the day of the funeral to let him know she was in labor and headed to the hospital. Their baby was born the next morning at 12:05 a.m.

It would be three months before she could come home.

The Cases first met at the Mississippi Highway Patrol office in Brookhaven as teenagers. John Nathaniel Case had failed his driver’s test and the Loyd Star student had to retake it. That’s when he saw Lori Ann, who went to Brookhaven High. She was about to take her test for the first time.

He remembers leaning over and giving her some advice before he left with his license in hand. “Just watch out for rolling stops and you’ll do good,” he said. “I never thought I’d be married to her.”

They met again soon after at the Exchange Club Fair. They’ve been together ever since.

They married in June 2006 and after a honeymoon in Gatlinburg, Tennessee, Nathan came home and immediately got on bus filled with teenagers from Pleasant Grove Baptist Church. That’s when he officially started as a youth pastor.

He’s now serving at his home church, Macedonia Baptist in Loyd Star. “The Lord called me there,” he said. “I prayed long and hard about it.”

The Cases pray about most things. They did a lot of praying about Ava Grace.

After she was born, air kept getting into her abdomen from a hole in her stomach. Surgeons basically cut her in half to fix the damage. She was 2 days old.

She had complications from surgery and that caused an infection. She aspirated when she ate so they put in a feeding tube. She had spells where her oxygen and blood pressure dropped.

Doctors advised that it was because she was a preemie.

“She was born too early and all this would come in time,” he said the doctors told them.

She spent the first 97 days of her life in the neonatal intensive care unit. “We put about 11,000 miles on a vehicle going back and forth every day,” he said. “We’d do a lot of driving, a lot of praying and a lot of crying.”

They’d get calls about Ava Grace and drop everything to head to Jackson. “The Lord had us in his arms the whole time and he’s going to continue to do that,” he said.

He gives a lot of credit to his mother, Cherri Case, and his mother-in-law, Sheila Boutwell, who helped them out when the youngest was in the hospital.

“They are angels who live on this earth and we can call them Mama,” he said.

Their church family, relatives and friends were also a big help during these trying times.

These people and their faith helped them more than they can say. “That’s the only thing that’s got us where we are today,” he said.

And where they are is home. “She’s at home and that’s what’s amazing,” he said.

For those first three months of Ava Grace’s life, her siblings had not met her. “They’d only heard stories and saw pictures about their little sister,” he said.

It was love at first sight when they finally brought her home. John Tate plans to be a great big brother to his baby sisters, and Ella Rose is taking the big sister role in stride.

“They’ll be protective of her,” dad said.

Christmas couldn’t be any better for the Cases.

“It will be a mama, a daddy, a big brother and a big sister and a little miracle laying in a bed that reminds us all why we celebrate Christmas,” he said.

Waste Pro will stay on regular pickup for Christmas

After the tornado of wrapping paper and bows has settled down this morning, the question becomes — what do you... read more