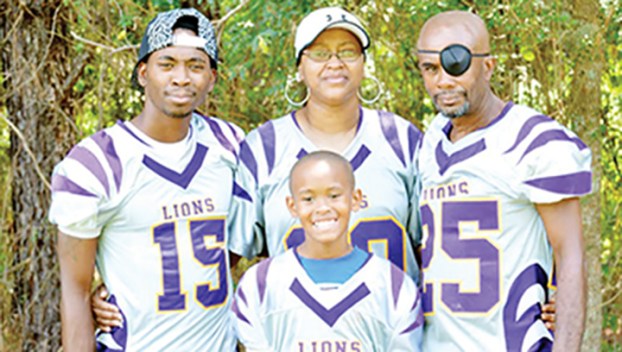 Frank Collins’ love for the game of football started young.

Growing up in Georgetown, it was hard to find a passion for him. He turned on the television and saw former Oakland Raiders running back Marcus Allen run over and through opposing defenses. His passion and drive for football started there and it all started with his love for the Raiders.

“I bleed silver and black all the way,” Collins said. “I watched the Raiders play growing up and Marcus Allen was always on TV. I loved the Raiders since. That’s my team.”

Collins has lived in Brookhaven for 30 years now and his drive for football has extended to the Mississippi Lions, a semi-pro football team in Brookhaven that takes in young men 18 years old and up to give them a second chance at playing the sport they love. Collins has been the owner of the team for five years and strives to develop the character of young men wanting to play football.

“It’s really a second chance program for these young men,” Collins said. “The goal is to develop young men into better people and better football players. Seeing them change every day is something my wife and I are so proud of.”

Collins met his wife Patrina, a Brookhaven native, 30 years ago and they have lived in Brookhaven ever since. Collins is the father of Kris and Kristian Collins. Collins’ wife is his biggest supporter and is with him every step of the way with the Brookhaven Lions.

“We both care about this team and these players so much,” Collins said. “We’ll always be around for them.”

The Mississippi Lions are a part of the Magnolia Football League, a semi-pro football league consisting of 10 teams throughout the state of Mississippi, including Brookhaven, McComb, Hattiesburg, Jackson and more. The teams play eight games a year with playoffs and a league championship every season. The Magnolia Football League is very competitive as all the teams in the league settle it out on the gridiron.

“Getting a chance to coach young men that want this second chance and want to win is what I work for,” Collins said. “Some good football players come through here and they work their tails off to possibly play football in college.”

Collins has seen a lot of players come and go through his football team, but a semi-pro championship would mean a lot to him in his football career.

“Getting these young men to move on and win a championship. Doing that in Lincoln County would be great,” Collins said about his goals. “This league adds character and develops so many young men.”

Collins is very confident in his team as they prepare for the upcoming football season. The 2017 football schedule will be released next week.

“This coming season might be our best season yet,” Collins said about his team. “We have really good players coming in that are dedicated to getting better. You really have to be dedicated to win and that’s what our guys strive for.”

Collins wanted to play football growing up, but says he didn’t have the size or strength to compete with the kids around him.

With the Mississippi Lions, Collins gets that chance to be involved with football and impacting more lives than ever.

“Being around football and impacting the lives of young men is everything I wanted and more.”