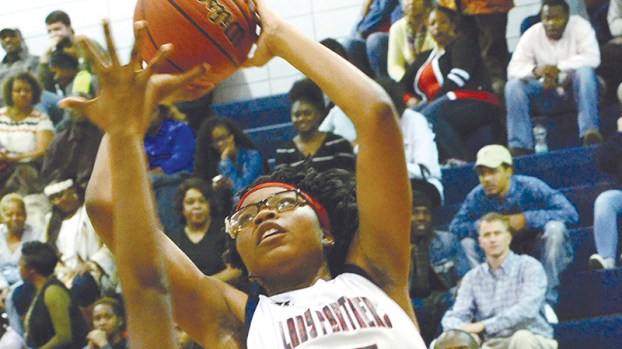 Photo by Dylan Rubino/Tamia Stallings (25) goes up to the basket in a game earlier this season against Lawrence County.

Christmas break is near its end for schools inside Lincoln County and basketball will start to heat up once the new year comes around.

That won’t be the case for the Brookhaven Panthers as they head to Laurel today to participate in the West Jones Christmas tournament.

The tournament is held at West Jones High School in Laurel and is between Brookhaven, West Jones, Oak Grove and Northeast Jones. The tournament will be a big test for the Panthers as they play key games to start the second half of the season before they head into district play.

The Brookhaven Panthers come into the tournament 8-3 on the season and are coming off an exciting overtime win against rival Lawrence County Dec. 16. The Panthers have been a very good road team this season, going 5-2 away from home and look to extend their strong road streak tonight against West Jones.

The Panthers have been led by senior guard Damarius Brooks, who leads the team in points, assists and steals per game. Brooks is averaging just under 21 points per game, four rebounds and two steals per game this season. Brooks made clutch shots for the Panthers in their overtime win against Lawrence County and finished the game with 22 points, five rebounds and four assists.

The Panthers have improved over the last month thanks to the play of sophomore forward Lafollette Bogan. He has been a strong presence on the glass, putting up second chance points and keeping possessions alive. Bogan is the leading rebounder on the team, averaging just under eight rebounds per game. The sophomore is also contributing on the scoreboard, averaging 13 points per game as well. He had 14 points and eight rebounds against Lawrence County and posted a double-double in their overtime loss to Tylertown with 22 points and 11 rebounds.

The stellar play of Brooks and the improvement of Bogan have been the keys to success for the Panthers in their 8-3 season. More wins in the West Jones tournament will go a long way for this team.

West Jones comes into the tournament 4-7 overall and on a five-game losing streak. Defense has been an area of weakness for the Mustangs as they’ve given up 99 points more than they have scored this season.

The Mustangs are led by senior point guard Brandon Jones, who is the player that makes the team go. Jones is averaging 16 points, three rebounds and three assists. Senior center LeMarcus Keyes is the big man in the middle for the Mustangs, averaging six points and seven rebounds per game.

West Jones is a team that doesn’t have a lot of size and that could help Brookhaven on the boards with Bogan and senior forward Jashawn Perkins. If the Panthers can dominate the glass and keep on getting great games out of Brooks and senior point guard Denarius Gray, the Panthers should roll in this tournament.

The Lady Panthers enter the tournament 4-8 on the season and coming off their best win of the season against Lawrence County 46-42 Dec. 16.

The Lady Panthers will face off against Northeast Jones to start off the tournament. The Tigers enter the matchup 3-5 overall and on a two-game losing streak. The Tigers feature a balanced scoring attack with four players averaging over five points per game.

Brookhaven has been subject to turning the ball over and forcing shots at times. If they can improve on both of those aspects, the Lady Panthers can make a strong showing and turn their season around.

We have drunk deeply of Christmas at our house, and now it is the dregs I must finish off. Yes,... read more