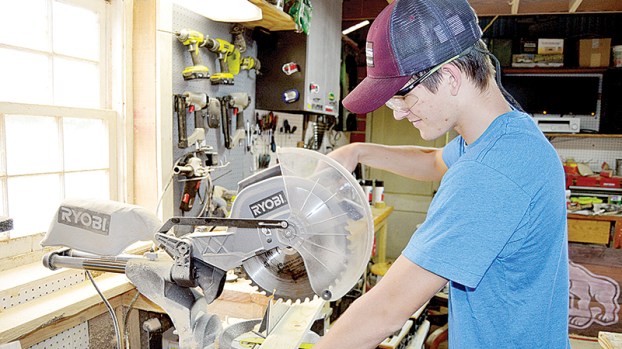 Photo by Donna Campbell/Jake Roberson, of Brookhaven, prepares to cut a pine board for a table he’s making for a neighbor. The 17-year-old recently got a shout-out on Twitter from “Fixer Upper” regular Clint Harp.

Jake Roberson recently got a shout-out on Twitter from “Fixer Upper” regular Clint Harp, but the 17-year-old teen missed it. He doesn’t tweet.

Fortunately, his dad does. Brad Roberson showed him the message.

Paula Roberson tweeted a photo of her son’s latest woodworking project — a table he’s building from scratch — to the Twitterverse Monday. She tagged @clintonharp with the message “Check out Jake Roberson making Christmas gifts in Brookhaven MS. Inspired by his @harpdesignco tour! Thanks guys, Merry Christmas.”

Harp, a carpenter known for his stunning designs and use of reclaimed wood, is one of Roberson’s favorite HGTV celebrities. He’s a regular on the DIY show, “Fixer Upper,” where hosts Chip and Joanna Gaines often call on him to create wonderful pieces for their clients.

Harp tweeted back: “Jake is a stud. Keep it up man! Looking forward to seeing you back in Waco one day.”

Roberson actually visited Harp Design Co., which is located in Waco, Texas, and took a tour of the facility where those stunning pieces are created.

He’s been a fan of the network for most of his life. “We used to watch it every Sunday morning before church,” he said.

Roberson interviewed Harp by email for his senior project at Brookhaven High School. “I thought it was the most amazing thing ever,” he said.

Knowing how much the Texas carpenter inspired her son, she arranged for him to visit the studios when they recently visited Waco.

The Robersons will be moving to Texas in May and were visiting the area.

Roberson toured the studios and met Harp’s team. They showed him how they constructed a table and process the lumber for the project. “It was really cool,” he said.

Unfortunately, Harp’s and Roberson’s schedules didn’t click and the teen didn’t get to meet him that day. But he’s got plans to visit again when he’s living in Waco, he said.

Roberson graduated from BHS this month and will be starting a semester at Copiah-Lincoln Community College in January. His mom teaches yoga there.

His father sold his business, Glass Doctor, and will be working with the glass company’s corporate offices in Waco.

Roberson has always liked working with his hands. His father had a small shop behind the house and he’d let Roberson watch until he was old enough to carefully begin carpentry projects. “I’ve always watched him,” he said. “I was probably 6 or 7 when he started letting me do stuff.”

Once he started, there was no holding him back. He watches shows on HGTV and does research on Youtube to perfect his craft. He spends a of of his free time — sometimes eight or nine hours — in the shop working on projects.

He plans to study business in college so he can own his own carpentry company like Harp. He’s even got a name: Roberson Design Co.

He likes the versatility of carpentry. “It’s always different,” he said. “I’m never making the exact same thing. I don’t want to grow up and sit at a desk and do the same thing every day.”

Roberson’s first big piece was a table for his grandmother’s back porch that he built when he was 15. People saw it and asked him to make tables for them, too.

He’s mostly building furniture, but he’d like to expand his inventory. “Most of the stuff I’ve built, I get inspiration from Clint,” he said.

As the New Year approaches, the gym memberships increase. This is nothing new for most fitness centers, but many health... read more