Little did Jarrius Adams know when he saw an ad on Facebook earlier this year that it would change his life.

Adams is the son of Bufford and Mary Drummond of Bassfield. His mother, Taqunna Buckley Adams, is a graduate of Prentiss High School.

The Hattiesburg High School graduate, now an Ole Miss sophomore, was lured in by the flashy signage asking for applicants to the Dr Pepper Tuition Giveaway. The giveaway offered a chance at $100,000 in tuition, but there were a lot of steps to go through first.

“You had to make a profile with your name, your age, your goals in life,” Adams, 19, said. “Then (your profile) had to get 50 votes on social media.

Adams, a public policy and political science double major, got the required votes and went on to make the video. He said he would use his degrees to work on fully funding public education and changing the voter registration system.

“I want to impact people’s lives,” he said. “I want to be the voice for the voiceless. There are different ways (I could do that). I could be a politician or focus on public education.”

On the Dr Pepper website, Adams is pictured with Democratic presidential candidate Hillary Clinton. The paragraph below his name lays out some of his platform: “My passion is politics, but only 19 percent of Americans trust the government. This is a problem. The government plays a major role in our daily lives.”

Adams is used to the spotlight. He had a successful debate career at Hattiesburg High, culminating in being named National Speech and Debate Association Student of the Year for 2015-16. His debate experience undoubtedly helped him make an attention-getting profile and video and contributed to his responsible nature, which allowed him to follow through during the next phase of the competition.

After the completion of the video, finalists were told they would be contacted by phone, but Dr Pepper officials would try to get through only three times. Adams stayed glued to his cellphone.

“I answered all random calls,” he said.

Finally, the call came. He was invited to attend the Big 10 Championship game Dec. 3 in Indianapolis. His challenge — toss a football into a 9-foot Dr Pepper can as many times as possible in 30 seconds.

Adams immediately began practicing with his younger brother Matthew, 12, who said the two worked out a system.

“We were throwing the ball back and forth and then we got the timer out and we timed ourselves for 30 seconds,” he said. “We saw how many times he could throw it back to me in 30 seconds. The highest was 23.”

Matthew said the back and forth was necessary.

“Practice makes perfect, so he needed me,” he said. “I was very confident he would win because we practiced a lot and he got better each time.

“Once you see somebody impress you, you know they’re going to do good on the big stage.”

Once Adams arrived in Indianapolis, he realized he was one of four semi-finalists. There would be a toss-off to determine the final two who would compete at the game for the $100,000 prize.

“Dr Pepper treated us like celebrities,” Adams said. “We had photographers following us. We sat in the suites.”

In the preliminary round, Adams tossed 16 footballs into the giant Dr Pepper can. The other contestants each made 10 shots. Adams was definitely going to the finals.

On the big day, Adams lined up on the side of the field with the other final contestant — a female student from the University of Southern California whom he had met the day before. They shook hands, and he heard the word, “Go!”

Adams said the crowd went wild and chanted his name “Jarrius! Jarrius!” In a matter of minutes, his phone had 145 messages on it. Adams went into the stands with his mother, but couldn’t sit still to watch the game.

Taqunna Adams believes there was a foreshadowing of her son’s win. Before the game, she and Jarrius were at a store and received 10 cents too much change. Taqunna Adams told Jarrius to give the dime back. She said the winning of the $100,000 was God blessing them many, many times over for returning that dime.

“I don’t know how it feels to go to school debt-free,” Taqunna Adams said. “I will go to my grave with debt. His undergrad is paid for, and now his graduate and law school is paid for.”

Back in Hattiesburg, Matthew Adams was enjoying some minor celebrity of his own. He had watched the football toss on the big screen TV at a local restaurant with his cousin.

“I was jumping up and down and everybody was telling me to calm down,” he said. “I said, ‘That’s my brother — don’t you see the resemblance?'”

Jarrius Adams said he still gets stopped by people who recognize him from the giveaway.

“It’s been a good experience,” he said. “I got a lot of love when I got back to Ole Miss. I still have people on social media saying they are proud of me.”

Adams sometimes has to pinch himself to believe it’s all true.

“I hung the check up over my TV and it’s like — this is really happening,” he said. “My mom and I can only drink Dr Pepper now.” 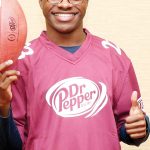 Lawrence County senior linebacker Azar Myles seemed to be everywhere on the field on defense for the Cougars. The senior... read more