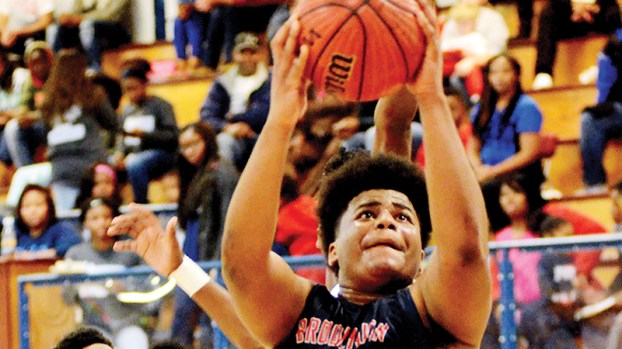 Photo by Dylan Rubino/Jashawn Perkins of Brookhaven (24) goes up to the rim in a game earlier this season.

It was a good start to the new year for the Brookhaven Panthers as they won both of their games in the West Jones tournament against West Jones and Oak Grove recently.

The two wins move Brookhaven to 10-3 overall on the season with a road game at South Pike coming tonight.

The Panthers started the tournament off hot Thursday against West Jones, taking a 28-15 lead at halftime against the Mustangs. The Panthers blew the gates open in the third quarter, outscoring West Jones 21-7 in the quarter to take a 49-22 lead heading into the fourth. West Jones would make a run of their own, out-scoring Brookhaven 19-12 in the final quarter, but Brookhaven would come away with the win 60-41.

Senior guard Damarius Brooks led the way for the Panthers with 15 points and senior forward Jashawn Perkins also scored in double figures with 10 points. Senior point guard Denarius Gray chipped in with nine points to add to the scoring.

Senior guard Brandon Jones led the way for West Jones, as he has all season, with 16 points, nine steals and five rebounds for the Mustangs.

Brookhaven followed that momentum in their win against West Jones with another win Friday night against Oak Grove 64-60.

The game meant a lot for Brookhaven head coach Jimmie Butler. The Panthers played Oak Grove in June and were dominated from start to finish. Ole Brook showed a lot of fight this time around, coming away redemption and going 2-0 in the tournament.

“They outplayed us in every aspect of the game,” Butler said of the game in June. “This win really displayed the character and development of this team.”

The Panthers trailed 20-19 in the first quarter, but turned it around and played great defense in the second quarter, outscoring Oak Grove 10-4 in the quarter.

The game would be an up and down affair for the rest of the clock, but Brookhaven held on just long enough for the 64-60 victory.

“It’s good to evaluate how we have developed since the summer,” Butler said.

Damarius Brooks continued his outstanding play in the tournament with 25 points on the night. Sophomore forward Lafollette Bogan and junior guard Richard Marshall scored 13 points each. Jashawn Perkins played another great game for the Panthers and added on 10 points.

Brookhaven had a hard time stopping senior guard Winceton Edwards from Oak Grove. The dynamic senior guard finished the game with 29 points, shooting 11-20 from the field.

The Panthers hit the road tonight to face South Pike and on Friday to face Natchez, kicking off district play.

The Lady Panthers didn’t have  the same fortunes in the West Jones tournament as they dropped their opening game against Northeast Jones Thursday 53-50. The loss drops the Lady Panthers to 4-9 on the season with road games at South Pike and Natchez coming up.

“We had our chances down the stretch, but did not capitalize,” Brookhaven head coach Preston Wilson said. “Still making young mistakes that we hope we can correct before we get into district play.”

The Lady Panthers got off to a fast start in the first half leading 23-21 at halftime. Northeast Jones came out more aggressive in the second half, outscoring Brookhaven 32-27 in the second half to win the game 53-50.