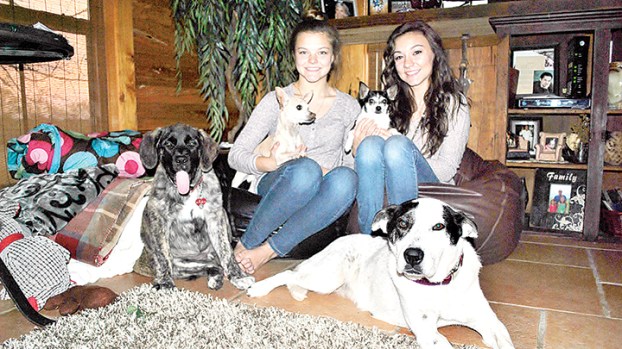 Photo submitted/Hanna Henderson (left) and older sister Halee Henderson are surrounded with some of their pets, Birdie, Scrappy, Peanut and Liz.

It was love at first sight when Lisa Henderson spotted Liz and her three legs on the Brookhaven Animal Rescue League’s website.

She’d seen the stray on the BARL site for a while, and kept going back to her picture. When her husband, Mark, decided he was getting a puppy to add to their menagerie that included three dogs, three cats and two teenage girls at their Caseyville homestead, all Henderson could talk about was Liz. She wanted her.

“She was on there for so long and nobody had snatched her up,” Henderson said. “I’m a sucker for the underdog.”

Liz came to BARL a few months ago on her own. Beth Hawkins Adcock, a volunteer with BARL, was standing at her car at the ballfields across from the BARL center with Lu Becker, the rescue league’s president, when Liz came up to them.

“My passenger side front door was open because I had just moved a kennel from my vehicle to Lu’s,” she explained. “Liz slowly walked from the ditch dragging her back leg. Lu and I watched as Liz walked purposely between the two of us and climbed into THE floorboard of my vehicle.

“She looked up at us with eyes of relief like ‘I’m here and I know y’all will help me.’”

Liz was extremely malnourished and a veterinarian recommended they amputate her leg. She recuperated at a foster home.

“She was loved on and taken care of at BARL until the perfect family adopted her right before Christmas,” she said.

That family was the Hendersons. Mark Henderson and 14-year-old Hannah picked her up on Dec. 23.

“It’s happy endings like these that keep our volunteers doing what they do, including me” Adcock said. “We work extremely hard to help animals in Copiah, Franklin and Lincoln counties and we accomplish a lot for an organization of our size. Liz’s story is a true ‘happily ever after.’”

Liz is happy at home now with her new family — Lisa and Mark and their daughters, Halee, 17, and Hannah, who are students at Loyd Star Attendance Center.

Mark just got a St. Bernard mastiff mix puppy before Christmas, too, and they already had two chihuahuas and a feist and three cats.

Henderson said her husband’s dog wants to be buddies with Liz.

“She loves Liz. She tries to play with her. Liz just puts up with her,” she said.

The rescue dog does have her favorites though. She likes Scrappy, the male chihuahua, and Lisa’s husband.

Henderson has tried to sway Liz with some extra toys and treats.

“I’m trying to spoil her a little bit more to get her to forget about Mark,” she said.

Liz’s missing leg doesn’t slow her down. It took her about 20 minutes to figure out the doggie doors that allow the pets the freedom to go in and out of the house and the yard.

“She gets anywhere she wants to go,” Henderson said.

The couple’s home off Hwy. 550 is surrounded by an 11-foot fence, so the pets can roam if they want to without the Hendersons worrying about their safety. “They can come and go as they like,” she said.

This wasn’t the Hendersons’ first time taking in a rescue dog from BARL. They recently lost Aggie, a dog they’d had for about 14 years. They recommend adopting pets from rescue leagues to anyone who is looking for a companion.

“There’s a bunch there that need a home,” she said.

In 2016, BARL adopted more than 500 animals into loving homes and transported more than 300 adult dogs and puppies to shelters in northern states where rescue organizations can find homes usually much quicker than in southern states, Adcock said. BARL also spayed and neutered more than 300 animals owned by those in financial need and by senior citizens, she said.

They raised their right hands Tuesday and swore to uphold the laws of the U.S. constitution, and for the next... read more