Funeral services for Edna Morrison, of Union Church, are Thursday, Jan. 5, 2017, at 11 a.m. at Union Church Baptist Church with burial at the church cemetery. Harrigill Funeral Home is in charge of arrangements.

Ms. Morrison, 99, died Saturday, Dec. 31, 2016. She was born May 1, 1918, in Union Church to George Odam and Annie Eliza Davis. She was the second of six children. She graduated from Jefferson County Agricultural High School and went on to receive her diploma from the Vicksburg School of Cosmetology in 1938. She spent her early professional career in Baton Rouge, Louisiana, where she married and raised her family. In her early ‘50s she moved to Jackson and started a second career working for the State Commission’s  Petroleum Tax Division as an auditor. She retired at age 70. She spent her later years in Dallas, Texas, with her family and many friends. She was an active member of Highland Baptist Church. 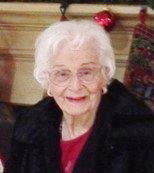