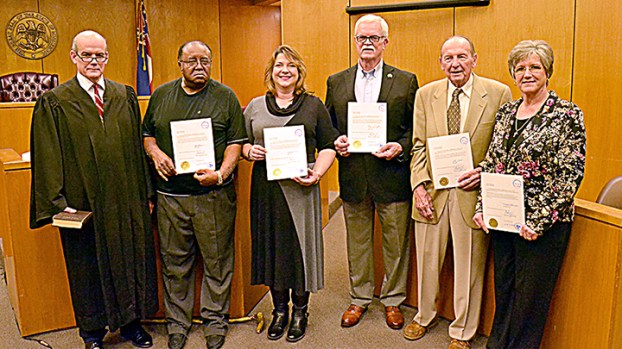 They raised their right hands Tuesday and swore to uphold the laws of the U.S. constitution, and for the next four years, the members of the Lincoln County Election Commission will do just that by keeping the voter rolls up to date. They’re the people who also keep the elections running as smoothly as possible.

Election commissioners receive a per diem of $84 for every day or period of no less than five hours accumulated over two or more days to prepare for an election or revising registration and poll books, Lincoln County Circuit Clerk Dustin Bairfield said.

However, commissioners receive a per diem of $150 per day for performing their duties on the actual day of any general or special election.

Bairfield said one of the most important duties of an election commissioner is to maintain accurate voter rolls and poll books.

Election commissioners are tasked with removing the names of all people listed erroneously on the books, or who have died, moved or become disqualified as electors for any cause, he said.

Tuesday was also the first day of the qualifying period for the Brookhaven muncipal elections. Nine residents signed statements of intent to run as either Democrat or Republican in the upcoming primary election, May 2.

Among those qualifying Tuesday were incumbent Mayor Joe Cox who is running as a Republican.

Individuals can submit their statement of intent at the Brookhaven City Clerk’s office through 5 p.m. March 3.

It’s a $10 fee if an individual is running as a Republican or Democrat, which goes to the party, Bairfield said. Those planning to run as independent must gather the signatures of 50 registered voters within the city limits. If the application is for an alderman seat, the signatures must come from the ward in which the candidate lives, he said.

Bairfield urges those running independent to not wait until March 3 to submit applications. The signatures must be verified by his office before the application is valid.

“If they turn it in that day, they don’t have time to run out and get signatures,” he said.

The primary election is May 2. If no one gets 50 percent of the vote plus one, there will be a runoff election, which will be May 16.

If there is a runoff, voters must stick with whatever party they voted in the primary, he said.

The general election is June 6. It will include the party primary winners and any independent candidates.

Residents can register to vote in the municipal election up to 30 days prior of the election. That can be done in the Lincoln County Circuit Clerk’s office during business hours, Monday through Friday from 8 a.m. to 5 p.m. or at the Brookhaven City Clerk’s office on Saturday, April 1, from 8 a.m. to noon.

Voter IDs can be obtained at the circuit clerk’s office.

Board of Supervisors explores options for road, bridge funding

The Lincoln County Board of Supervisors Tuesday started the new year the same way they ended the old one —... read more