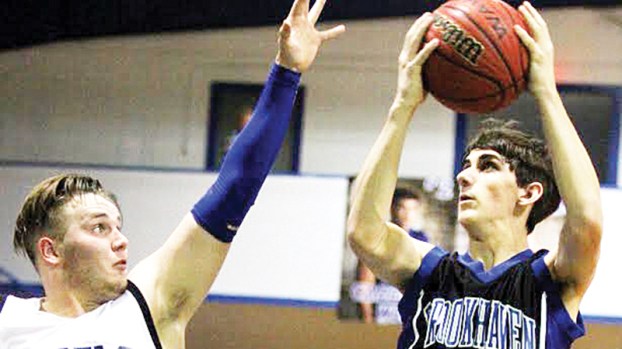 Photo by Sherylyn Evans/BA’s Luke Jackson (10) drives into the lane for the shot Tuesday night against ACCS Rebels.

The Brookhaven Academy Cougars and Lady Cougars kicked off the new year Tuesday night traveling to Natchez to face the Adams County Christian School Rebels in district play. The Cougars cruised to a 57-38 win and the Lady Cougars fell in a hard fought game by a score of 55-52.

The BA Cougars (14-3) got off to a fast start and never looked back after taking a 33-15 lead at halftime on their way to the 57-38 win. Ethan Nations posted a game-high 19 points on the evening. Tate Felder added 10 points to the scoring for Brookhaven Academy and senior Dylan Winborne had eight points as well. Julian Wilson led the Rebels in scoring with 14 points.

The Lady Cougars (11-7) carried a narrow one-point lead into the fourth quarter looking to pick up their first district win of the season. However, the Lady Rebels from ACCS had other plans and outscored BA 19-14 in the fourth quarter to take the 55-52 win.

The BA JV Lady Cougars showed no holiday rust coming out with one of their most complete performances of the year to start off 2-0 in district play with a 41-8 win over ACCS. Makayla Martin led the Lady Cougars with 10 points followed by AB Warren with nine. Julie Anna Bartram had seven points and Merritt Evans scored six points to round out the scoring.

The BA JV boys never could get on track Tuesday afternoon dropping a close contest to the Rebels by a score of 27-24. Brady Spring and Britton Nelson led the Cougars in scoring with six points each.  Tyler Fortenberry added five points in support.

BA will be on the road Friday as they visit district rival Laurel Christian School and travel back home Saturday for games against Columbia Academy. First tip on Saturday at John R. Gray Gymnasium is scheduled for 3 p.m. with seventh grade girls’ action.