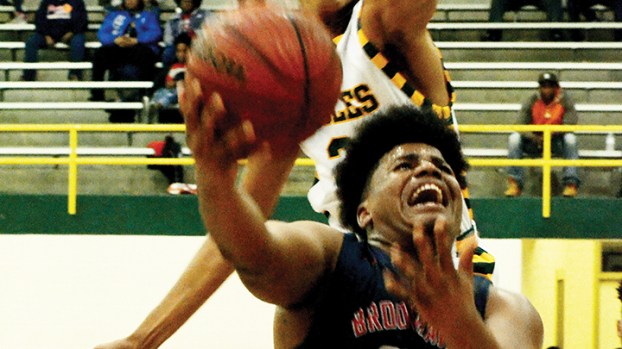 Photo by Dylan Rubino/Jashawn Perkins (24) of Brookhaven stretches for the layup Tuesday against South Pike.

The game started off extremely slow against South Pike Tuesday night, but the Brookhaven Panthers found life in the second half as the offense picked up and Brookhaven cruised to the 63-45 win. The win moves the Panthers to 11-3 on the season, with district play starting tomorrow at Natchez.

“We were too relaxed in the first half. We made too many careless mistakes and missed shots we usually make,” Brookhaven head coach Jimmie Butler said. “The blessing is that they were not making shots either.”

After halftime, the Panthers were a different team and came out with a different intensity for the rest of the game. Brookhaven outscored South Pike 21-7 in the third quarter and 24-18 in the fourth to take home the victory.

“During halftime, we had to really challenge the players to bring more intensity to the game and they responded immediately during the third quarter,” Butler said.

Senior point guard Denarius Gray led the Panthers in scoring with 17 points on the night and sophomore forward Lafollette Bogan followed up with 16 points.

South Pike seemed to throw the Panthers out of their rhythm in the first half with great defense and forcing tough passes which helped create turnovers and scoring chances for the Eagles early on. With an up-tempo offense that Brookhaven runs, the offense stalled from the pressuring defense.

“Coach Harrell had a good game plan which appeared to slow the game down and interrupt our style of play,” Butler said.

With the victory, Brookhaven has now won four games in a row and stand atop of their region in district play.

Their first district game comes Friday with a trip to Natchez to face the Bulldogs. Natchez stands at 3-8 so far on the season and enter the matchup on a two-game losing streak. Coach Butler is looking forward to a competitive matchup with Natchez to start off the important stretch of district games. Butler said the team was very young and competitive last year and gave his team trouble at times.

“We cannot afford to get off to a slow start,” Butler said about Natchez. “They are tall and long, which should challenge our rebounders. Their guard play is good as well. I expect a very competitive ballgame.”

Brookhaven stands along in first in the 5A Region 6 standings with Natchez a distant second place at 3-8 overall. Provine is in third at 3-10 overall and Wingfield at 3-12 overall.

Besides Denarius Gray and Damarius Brooks, the Panthers have been getting solid contributions all around from the rest of their roster, especially from junior guard Richard Marshall and sophomore forward Lafollette Bogan. Senior forward Jashawn Perkins has been helpful down low, getting rebounds and second chance points to extend possessions. Gray and Brooks will do their part when it comes to scoring the basketball, but if the other players contribute like they have been lately, the Panthers will be hard to beat in district play.

Brookhaven falls to 4-11 overall on the season with district play starting Friday night at Natchez.

“We showed our competitiveness against a very good team that was undefeated,” Brookhaven head coach Preston Wilson said. “We competed down the stretch and could’ve made some easy shots.”

One Brookhaven man pleaded guilty this week to touching a child for lustful purposes, while another turned himself in to... read more