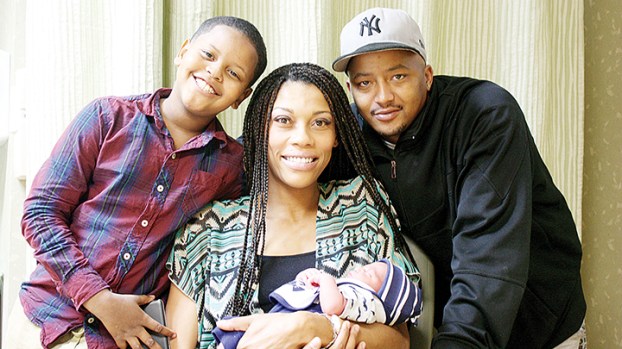 Photo submitted/Chance Watts is excited to be a big brother to Chasen Grai Chambliss, the first baby born in Lincoln County in 2017. With the boys are new mom Amber Watts and Chase’s dad, Jacoby Chambliss. Chasen was born Jan. 2 at King’s Daughters Medical Center in Brookhaven.

Brookhaven’s first baby of the year has arrived

Amber Watts has lived away from Lincoln County for a year, but she knew from dealing with the doctors and hospital in the past that she wanted her baby to come into the world in Brookhaven.

She just didn’t expect he’d do it so early.

Chasen Grai Chambliss was born in the LDRP Suites at King’s Daughters Medical Center on the second day of the year. All 6 pounds and 13 ounces of him made his arrival at 8:14 p.m, making him the first baby to be born in Lincoln County in 2017.

To celebrate the event, the 19-inch bundle of joy, his mother and father Jacoby Chambliss were presented with a gift basket of baby items.

Watts, who lives in Fayette, said she was appreciative of the hospital’s thoughtfulness.

Chase wasn’t due until Jan. 10, so having the New Year’s baby wasn’t even on her radar. But she’s loving the notoriety and that her son will have a unique story about his birth.

“I’m still in shock,” she said. “I honestly didn’t think he was the first.”

Watts lives in Jefferson County, but called Brookhaven home for four years. She liked the hospital and staff here and her sister, Jessica Watts, still lives in the city.

Since she’s only 35 minutes away, she figured KDMC would be a good place to have a baby.

She was hanging out with her boyfriend’s mother over the weekend and she was concerned about the weather.

“She said, ‘This is baby weather. You’re going to have him,’” Watts said.

On Jan. 2, she felt a bit odd and her back hurt. She felt mild contractions, but figured she had another week at least. She went to KDMC to get checked out and realized she was in labor. Chasen Grai was born seven hours later.

Chambliss made it from work in time to be in the delivery room with his girlfriend and watched as his son was born.

“He saw everything,” she said. “He was joking with the doctors, about cutting the umbilical cord: ‘Y’all need to get some more scissors, these are kind of dull.’”

Watts’ sister arrived soon after and swooped in to give some auntie love to baby Chase.

“He’s a superstar already,” she said.

The baby’s older brother, Chancellor, got to name him.

“He said, ‘I want my brother to have a name close to mine. I want to name him,’” Watts said.

Chance came up with Chase, but she wanted to tweak it for his legal name. She picked Chasen. And since Chance’s middle name is Gregory, she wanted something similar for his little brother.

“One day I was having a bad day, like an in between black and white day,” she said.

That’s how she came up with Grai, picking a more unique spelling than the color.

She said the family is already calling the baby Chase.

“It will only be Chasen when he’s in trouble,” she said.

Freezing weather ahead for Lincoln County

Lincoln County will get its first wintry mix of the year with temperatures dropping below the upper 30s today, which... read more