A memorial service for Jerelene Smith Bell, of Brookhaven, will be Saturday, Jan. 7, 2017, at 10:30 a.m. at First Baptist Church of Gulfport. Burial will be at the Biloxi National Cemetery at a later date. Riemann Family Funeral Home in Ocean Springs is in charge of arrangements. 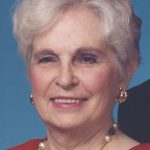 Visitation will be at 10 a.m. until the time of service at the church.

Mrs. Bell, 86, died Friday, Dec. 16, 2016, at her home in Gulfport after a short illness. She was born May 6, 1931, in Brookhaven to Clyde and Bessie Smith. She was a graduate of Brookhaven High School, where she was a majorette in the Brookhaven band.

Her interest in art and photography was piqued when she worked at the art gallery in her hometown.  Later, that talent was used as she opened Jere’s Frame Shop and Gallery in Gulfport. She made many lasting friends at the shop, as she shared in their lives through the artwork and photos she framed for them. She met the love of her life, William Bill E. Bell at Copiah-Lincoln Junior College. They were married May 30, 1952, and were married 64 years when Bill passed away.  A little over three months later, she was reunited with him in heaven. She was a faithful member of First Baptist Church of Gulfport.  It was her pleasure to serve as hostess to many delightful meals with her Bible Study group. Deep friendships were established with this group of ladies.

Preceding her in death were her husband; parents; and sisters, Voncille Smith Johnson and Debbie Smith Byrd.

In lieu of flowers, the family is requesting that memorials be made to the Lottie Moon Mission Fund through the First Baptist Church of Gulfport.

An online guestbook may be signed, and memories shared at www.riemannfamily.com.