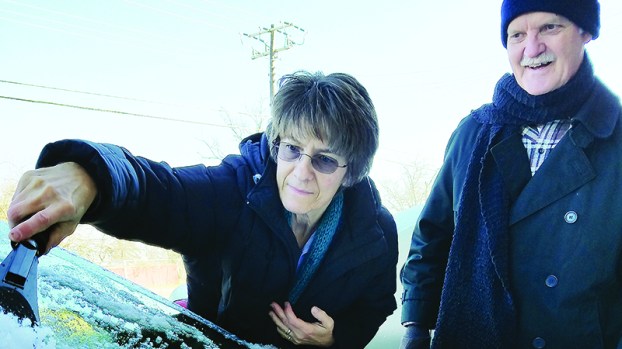 Photo by Donna Campbell/Shirley and Larry Hendricks of Brookhaven scrape ice from a windshield Saturday morning.

A hard freeze warning remains in effect until noon Sunday, according to the National Weather Service.

Temperatures will drop into the upper teens to near 20 in most areas with temperatures not rising more than a few degrees above freezing until midday Sunday.

Some snow fell Friday, covering parts of Lincoln County in thin, spotty layers of fluffy white, but the precipitation was mostly sleet that turned to slush.

Schools dismissed early Friday in anticipation of hazardous road conditions and government offices and some businesses closed early as well.

Icy roadways are to blame for numerous collisions and slide-offs into ditches, but no serious injuries have been reported.

In Lincoln County, several dozen crashes and calls for assistance were reported Friday and Saturday morning, Fortenberry said. He expected more calls to come in to 911 Saturday night.

He advised drivers to stay off the roads this morning if possible and to use extreme caution if they must get out.

Crews in the city and county and Mississippi Department of Transportation were out late into the night Friday and all day Saturday sanding roads and bridges, said Brookhaven Police Chief Bobby Bell and Lincoln County Emergency Management Director Clifford Galey.

Galey said Friday afternoon saw an increase in traffic crashes, but he couldn’t report an exact number. “It’s too numerous to tell you, but there were no major injuries,” he said.

He said drivers were going the speed limit on icy roads then needed to stop suddenly. “They hit their brakes and get to spinning,” he said.

County crews were out until 10 p.m. Friday and at it again Saturday morning putting sand on roads and bridges. MDOT crews worked through the night Friday into Saturday.

“If you don’t need to be on the roads, stay off of them until at least the afternoon,” Galey said.

Temperatures Sunday will reach a high of 41 degrees, with a hard freeze warning in effect until noon, according to the NWS. It will be sunny and clear through the night, with a low of 26 degrees expected.

On Monday, the high will be 56 degrees with a low of 47, then it’s expected to reach 70 degrees Tuesday.

If you do the crime, you pay the time, but what happens after that? Most jobs require background checks, which... read more