File photo / Tommy Clopton of Brookhaven led his Panthers to an 8-4 overall record during the 2016 season, leading to being named coach of the year by The Daily Leader. 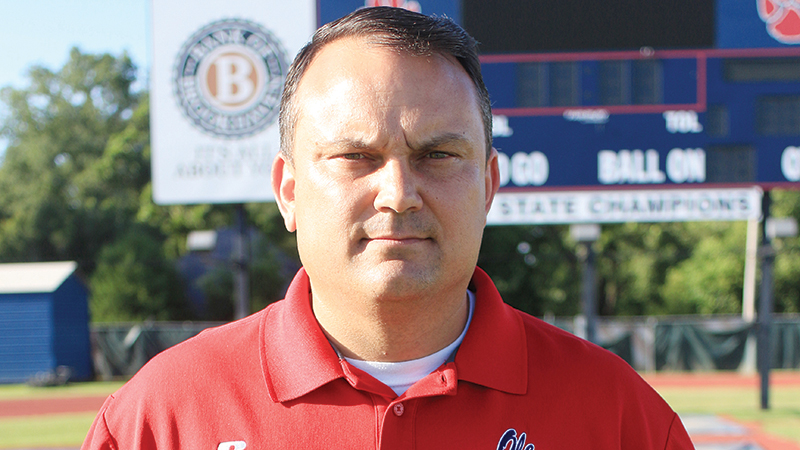 File photo / Tommy Clopton of Brookhaven led his Panthers to an 8-4 overall record during the 2016 season, leading to being named coach of the year by The Daily Leader.

It was a complete turnaround in the 2016 football season for the Brookhaven Panthers and head coach Tommy Clopton.

Growing up the son of a coach, it’s easy to say Clopton has been surrounded by football his whole life.

Now as the head coach of the Brookhaven Panthers, Clopton coaches his son Trace Clopton, a junior at Brookhaven High School and the star offensive lineman of the team. Clopton had the privilege of playing for his father, Rickey Clopton, growing up and now makes every moment last coaching his own son in the game he’s surrounded by.

“Coaching Trace has been one of the most challenging and rewarding things I’ve ever done,” Clopton said. “As the son of a coach, I know how challenging that can be, but I respect my own dad more now for how he handled being my coach. Trace has a great work ethic and has used the blessings God has given him to become a really good football player and leader of our team.”

Clopton’s Panthers got off to a good start to the season, going 4-2 over the first six games. Coming off a home loss to Wayne County, the Panthers returned home to face Provine in a district matchup. That’s when the season started to change.

The offense changed drastically when Quinn went down for the season, but the Panthers never faltered, finishing the rest of the season 3-2 overall.

“When we lost Sevante, we lost the guy on offense that had started 16 games for us and understood what we were trying to do on offense,” Clopton said. “When he went down, we had to really lean on our running backs and offensive line to carry the load on offense until Byrion got his legs under him as our quarterback.”

The credit doesn’t just go to the running backs for their success on the ground. It all starts with the big guys up front on the offensive line paving the way, something coach Clopton likes to build his teams around. With only one returning starter up front this past season for Brookhaven, the success came as a pleasant surprise.

“All good football teams have to be good up front,” Clopton said. “Coach Powell did a really good job putting together a group of young men that played really hard together and for each other.”

It was a disappointing end to the season for Brookhaven as they fell to Hattiesburg 42-14 in the first round of the 5A state playoffs, but the accomplishments of this team can’t be ignored.

With the injury to the starting quarterback, the change of offensive game-planning and the defense setting the tone for the rest of the season, Clopton and his staff kept his team on track and overcame a lot of adversity to finish the season at 8-4.

“You never want to see a good season come to an end, and you hate to see your seniors play their last game,” Clopton said. “We’ve played a lot of young players the last two years in the playoffs. Hopefully, we are able to take those experiences and turn the into playoff wins next fall.”

At 42 years old, Clopton said he’s never lived a year without being involved with football in any way possible. Football is his life and he wouldn’t have it any other way.

“When former players go off to college and then come back and talk to you about going into coaching, I always tell them there’s not a more rewarding or more frustrating profession in this world,” Clopton said. “God has blessed me with the opportunity to have an impact on young men’s lives for the last 19 years and for them to have an impact on mine.”

Coach Clopton would like to thank the Brookhaven School District administration, faculty, staff, students and all the supporters of the football team for their continued support.

The Mississippi Dept. of Transportation advises drivers to stay off roads where ice is present today. That includes Lincoln County. With... read more