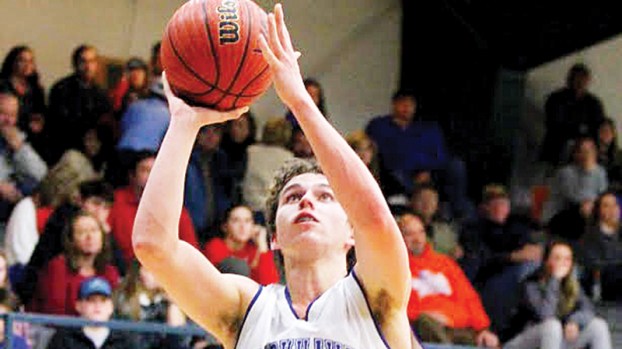 Photo by Sherylyn Evans /Ethan Nations of BA (32) goes in for the layup recently against Columbia Academy.

The Brookhaven Academy Cougars and Lady Cougars faced off with district rival Columbia Academy Saturday afternoon with the Cougars falling by a score of 58-44 and the Lady Cougars picking up a much-needed win 59-39.

In varsity boys action, the Brookhaven Academy Cougars (14-4) kept the game close, but could not overtake the current top-ranked Columbia Academy squad down the stretch, eventually falling by a score of 58-44.  Ethan Nations led the Cougars and all scorers with 17 points and five rebounds for the game.  Dawson Flowers had nine points and Cade Brown added eight points to the scoring total.  Wiley Cleland led Columbia Academy in scoring with 14 points for the game.

With the victory, Columbia Academy moves to 7-1 overall on the season.

The Lady Cougars (12-7) used a dominating 17-1 run in the fourth quarter to pull away from Columbia Academy, picking up the 59-39 win.

“This was one of our better shooting performances of the year and a really good team win,” Brookhaven Academy head coach Jason Case said after the win.

Sissy Byrd led the Lady Cougar scoring attack with 16 points, including 11 in the first quarter.  Jana Case and Kailyn Jordan each had 12 points and Anna Michael Smith added 10 in support.  Case had 10 rebounds tolead the team.  Lauren Rowley led Columbia with 22 points for the game.

The BA JV boys could not get on track Saturday afternoon after falling behind early and dropping the contest to Columbia Academy by a score of 49-30.  Brady Spring led the Cougars with nine points followed by Tyler Fortenberry with eight.

BA will be on the road Tuesday, visiting Simpson Academy.  Seventh grade girls first tip is set for 3 p.m. BA will be back at John R. Gray Gymnasium on Thursday for a non-district contest with Wilkinson County Christian Academy.