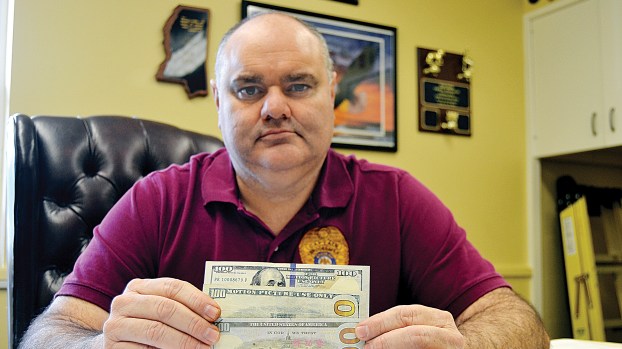 Photo by Donna Campbell/Brookhaven Police Capt. Clint Earls holds a few bills that have been recently passed off as real. Merchants should be on the lookout for money with a “For motion picture use only” stamp on it or pink Japanese markings.

Counterfeit money not a joke for Brookhaven merchants

Funny money is no joke for the unsuspecting merchants who get stuck with it.

Several merchants recently have accepted counterfeit money without knowing the bills were worthless.  A man unknowingly used a $100 bill he found on the ground at the Christmas parade to pay for a family member’s newspaper subscription at the The Daily Leader. Wanza McGuffee, who owns The Honey Pot, found a counterfeit bill in her deposit this week.

In the newspaper’s case, getting a resolution was just a matter of calling the subscriber and explaining what happened. She relayed the message to the man and he quickly returned with the money for the subscription and the change he was given.

But McGuffee wasn’t so lucky. It was busy that day and she took several large bills. She has no idea who may have spent it in her store. She has a pen that she purchased that can be used to check counterfeit money, but she didn’t take the time to check currency that day.

Two types of bills have been seen recently in Brookhaven.

Some of the fake bills found in Brookhaven are printed with the words “For motion picture use only.” But it is written in the same font as the words on a real bill, making it easy to pass to an unsuspecting store.

As it turns out, it may not be illegal to use that money. According to Earls, the unauthorized reproduction of currency is illegal, but these fake bills printed with “For motion picture” weren’t reproduced as real currency. They are movie props, and owning them isn’t illegal. And the person using them can always claim ignorance if confronted.

Other bills, like the ones The Daily Leader and The Honey Pot encountered, have a pink stamp of Japanese characters.

“If you could decipher it, it would probably give you an indication the bill’s not real,” Earls said.

• Advise clerks to be attentive when taking cash. Look for the odd markings and feel for the smooth paper that fake money can be printed on. Fake bills tend to be slicker, lacking the tooth of an authentic note, or may seem like just old money. Most notes in circulation have the identifiable strip that is most visible in the $100 note. Denominations starting with the $5 have a strip that can be seen when the bill is held up to a light and it becomes translucent.

• Purchase counterfeit detector pens and use them. The ink from the pens changes colors when a merchant draws a line across a suspect bill, turning amber to indicate genuine currency and turning black or dark brown to indicate counterfeit currency.

• If in doubt, rub the bill on a plain, white sheet of paper. Real money will leave a green or black smear of ink. Fake money won’t do that.

“Once the ink dries on it, it won’t give you the impression,” he said.

If a merchant or individual accepts counterfeit money, call the police, he said.

It’s a little different sitting on the outside looking in, but Bogue Chitto attorney Bobby Moak is still watching. Moak,... read more