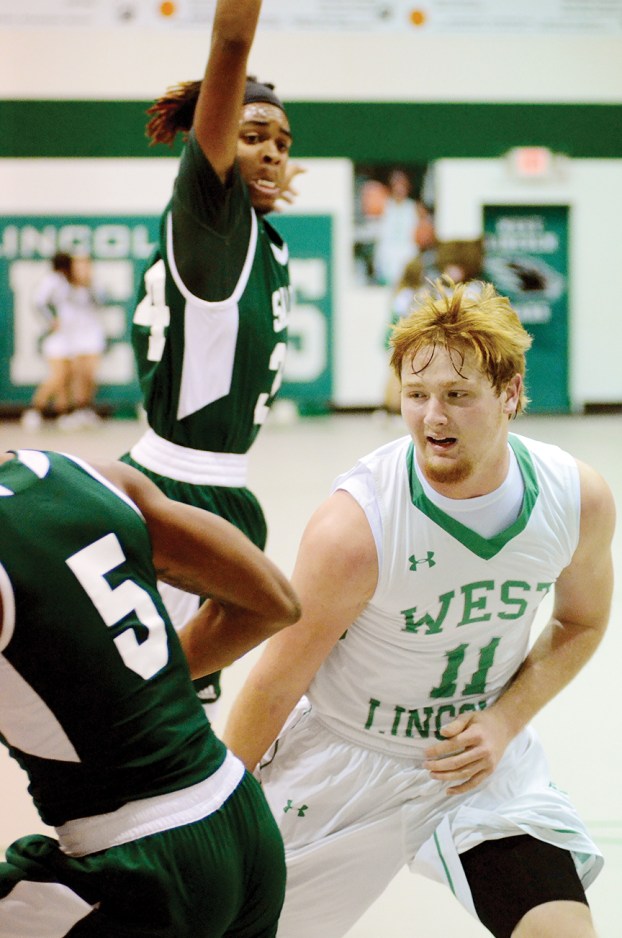 File photo/West Lincoln’s Chase Owen (11) passes out of the lane in a recent game.

“They shot the lights out in the first half,” West Lincoln head coach Lane Young said about Prentiss. “We just have to working hardtop get better.”

Prentiss continued their hot start and took a 42-26 lead going into halftime. Trailing 52-39 heading into the fourth quarter, West Lincoln would cut the lead the Prentiss lead to only seven points and outscored the Bulldogs 17-15 in the quarter, but it wasn’t enough.

Sophomore guard Adam Martinez led the Bears in scoring with 15 points in the game and junior center Chase Owen followed up with 13 points.

Four players would score in double figures for Prentiss with senior point guard John Smith leading the way with 15 points for the game.

West Lincoln is now 0-3 in district play so far this season and will need a bounce-back performance Friday night at Amite County.

The West Lincoln Lady Bears used a dominant first half to blow by the Prentiss Lady Bulldogs by a score of 78-51 Tuesday night. The win moves the Lady Bears to 5-11 overall and the loss drops Prentiss to 2-10 overall.

“The girls shot the ball very well,” Young said. “They did a good job of just playing hard for the whole game.”

Sophomore guard Megan Gerald had her best game of the season, leading the Lady Bears with 28 points for the game. Sophomore guard Skylar Hall helped the scoring load with 13 points and senior forward Demesha Deer followed up with 10 points.

Next up for West Lincoln is a road trip to Amite County Friday night. The girl’s tip off at 6 p.m. and the boys follow up at 7:30 p.m.