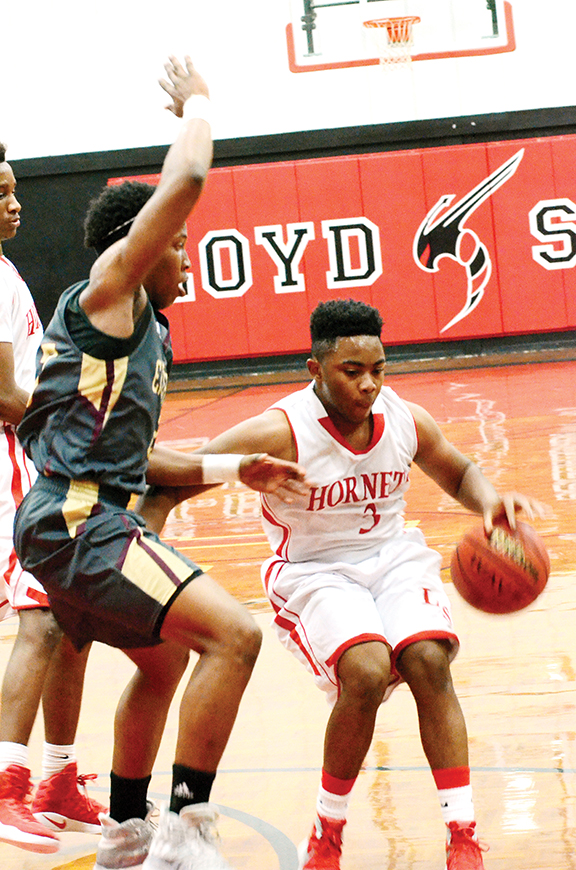 It was a defensive battle from start to finish Friday night at Loyd Star High School, but the Hornets got the stops on defense and buckets when needed, clawing their way to a 46-33 win over Enterprise.

After going 3-5 over the first eight games, Loyd Star has now won five in a row to move to 8-5 overall on the season. With the loss, Enterprise drops two in a row and falls to 9-7.

“Our boys played exceptionally well all throughout the ballgame,” Loyd Star head coach Gene Britt said. “Our offense executed really well, especially in the fourth quarter when we needed it to.”

Loyd Star held a slight lead throughout the entire game and the defense dictated the tempo of the whole game. The Hornets put a strong focus on Enterprise senior guard Dwayne Pendleton and held him to just 14 points for the game.

“Whenever he came inside, we would put two bodies on him,” Britt said. “He’s a really good player and we knew we had to stop him to win the game.”

It was a low-scoring first half with Loyd Star holding a slight 22-19 lead going into halftime.

The Hornets took momentum at the start of the second half by opening on a 9-2 scoring run and ended the third quarter with a 34-24 lead.

Enterprise would not go down without a fight as they cut the Loyd Star lead to six points in the fourth, but timely plays down the stretch gave Loyd Star the much needed district victory.

“I thought our effort was really good all night long,” Enterprise head coach Shane Adams said. “The kids did exactly what I asked them to do on defense. I couldn’t have asked for anything more out of them. They busted their tail.”

The difference for Enterprise simply came down to not making enough shots. Adams said that his team will have games like this from time to time, but they just have to keep working.

“We just have to keep working hard to get better and get ready for West Lincoln Tuesday night,” Adams said.

After suffering their first loss of the season Tuesday night against Bassfield, the Loyd Star Lady Hornets came out aggressively and got back to their winning ways, taking down Enterprise 62-32.

The win moves the Lady Hornets to 12-1 overall and drops the Lady Jackets to 12-4 overall.

“We cut down on the turnovers a lot, played good team basketball and got on the boards really good tonight,” Britt said. “All of our players played really good and they all contributed in different ways tonight.”

Even with a slow start, Loyd Star jumped out to a 14-6 lead at the end of the first quarter. The second quarter put the game out of reach as they Lady Hornets outscored Enterprise 22-11 to take a 36-17 lead going into halftime.

Loyd Star dominated the rest of the way and cruised to the victory.

Senior forward Makenzie Smith led the Lady Hornets in scoring with a game-high 18 points, followed up by senior guard Lydia Brit with 14 points.

The Brookhaven Academy Cougars and Lady Cougars were hitting on all cylinders Thursday evening as the visiting Wilkinson County Christian... read more