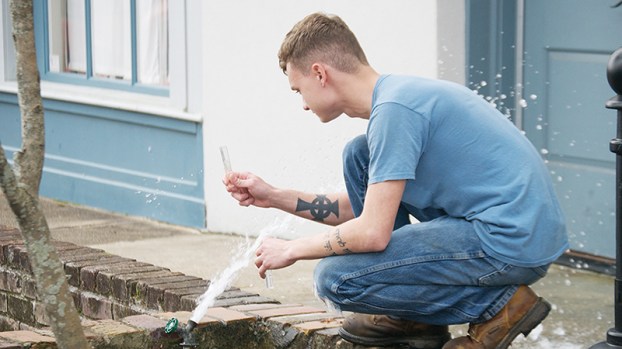 Photo by Donna Campbell/Zech Brown with Mitchell Technical Services, the contractor for the Brookhaven Water Treatment Plant, collects samples Monday from one of 24 areas in the city.

Water in Brookhaven still not safe to drink

Officials expect Brookhaven to remain under a boil-water notice today and possibly longer.

The Mississippi State Department of Health on Thursday placed the entire city of Brookhaven — some 12,500 customers — under a boil-water advisory because of the presence of E. coli and coliform bacteria found in samples taken Wednesday.

Zech Brown with Mitchell Technical Services, the contractor for the Brookhaven Water Treatment Plant, collected samples Monday from 24 areas in the city.

Samples were sent to the Mississippi State Department of Health and results take about 24 hours, which would be about 2 p.m. today, said Ralph Augimeri with Mitchell Technical Services.

The state needs two days of clear samples to lift the boil-water advisory.

Samples were collected Sunday as well.

Liz Sharlot, director of communications for the state Department of Health, said as soon as the sample tests show there is no presence of E. coli or coliform bacteria, the advisory will be removed.

Customers can go to healthyms.com and search under “boil-water notices” for the latest status for Brookhaven, she said.

The presence of E. coli and total coliform bacteria is a serious heath concern according to the U.S. Environmental Protection Agency. Those bacteria in the water samples indicate that the water may be contaminated with human or animal wastes. Microbes in these wastes can cause short-term effects such as diarrhea, cramps, nausea, headaches or other symptoms. They may pose a special health risk for infants, young children and people with severely compromised immune systems.

Health officials strongly recommend that all water be boiled vigorously for one minute before it is consumed.

The Brookhaven School District and King’s Daughters Medical Center are using bottled water while the city is under the advisory.

Restaurants in the area are buying ice and bottled sodas and water.

The Davises have been buying jugs of water for most of their cooking, rather than boiling it.

“We’re using that when we’re making our grits and our gravy. I don’t want to take the chance of making anybody sick,” she said.

Davis is also boiling water for cleaning, opting to leave it boiling for three minutes instead of the recommended one minute. They use the boiled water for mopping and cleaning.

“We’re trying not to use any city water at all,” she said.

They’re also buying ice and two-liter sodas. “I can’t even tell you how much we’ve gone through already,” she said.

Customers were confused Thursday because soon after the state issued the boil-water alert, some officials with the city said the alert affected only the 30 blocks between East Cherokee Street and South First Street. Then an hour later, Kris Xifos, the superintendent for the Brookhaven Water Department, released a statement saying that because the state put the entire city under a boil-water alert, everyone served by the City of Brookhaven’s water supply should take the necessary precautions advised by the state.

• Do not use ice unless it has been made with boiled water. Freezing will not necessarily kill harmful bacteria.

• Wash your dishes in boiled water, or use paper plates for the next few days.

• Wash your fruits and vegetables with boiled or bottled water since they may have been exposed to affected water from grocery store sprayers.

• Wash your hands and bathe as usual. Bathing is safe as long as no water is swallowed.

• Brush your teeth with boiled or bottled water.

• Fish in aquariums are not affected.

When the alert is lifted:

• Check water filters (in faucets, refrigerators and elsewhere) and replace if necessary.

• Do not use water from your hot water heater for drinking until several exchanges of the tank have occurred.

• Run dishwasher through a cycle or two before washing dishes.