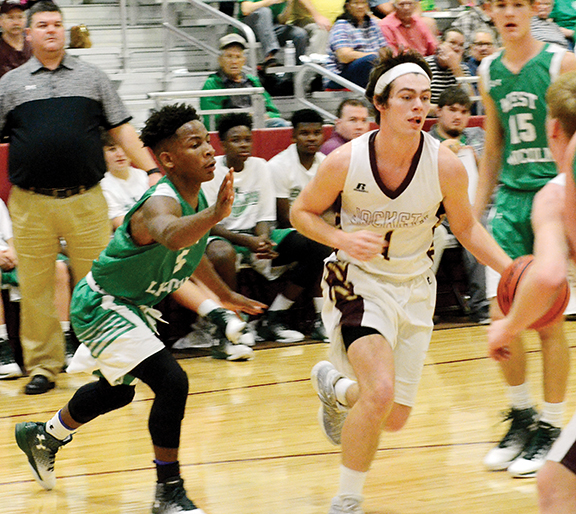 Toby White of Enterprise (1) drives against Ledarrius Jones of West Lincoln in their win Tuesday night 48-37. (Photo by Dylan Rubino)

The Enterprise Yellow Jackets showed improvement as the game went on, defeating West Lincoln 48-37 Tuesday night and picking up their first district win of the season. The West Lincoln Lady Bears have now won three in a row as they beat the Enterprise Lady Jackets 39-30.

The Bears came out of the gate on an 8-0 run before the Jackets made it into the scoring column. West Lincoln took a 12-8 lead at the end of the first quarter before Enterprise began cutting into the West Lincoln lead to start off the second quarter and found themselves in a tie game. Enterprise was able to take the lead thanks to their defensive pressure in the final minutes of the second period, taking a 20-15 scoring advantage into halftime.

After a slow start in the third period, West Lincoln started hacking away at Enterprise’s lead. The Yellow Jackets used their momentum in the quarter and took a 34-24 lead into the fourth quarter. The Bears rallied in the final quarter to cut into the deficit, but it was too much to overcome as the Enterprise defense led them to victory over West Lincoln by a score of 48-37.

“Thought the boys played real hard, especially on defense. West Lincoln is a good shooting team. Thought we did a good job to hold them to 37 points,” Enterprise head coach Shane Adams said. “We played better offense tonight, which struggled the last few games. Proud to get the win. Now we get ready for Prentiss.”

The offense for West Lincoln continued to build on their margin over the Lady Jackets, ahead 31-21 going into the final quarter. Despite trailing, the Lady Jackets refused to give up as they were able to hit back-to-back three pointers to make a comeback effort. The Lady Bears survived the Lady Jackets attempt and won the game 39-30.

Enterprise was led by senior guard Courtney Greer with eight points for the game. Junior guard Haley Nations scored seven points and sophomore guard Brook Foster scored six points to round out the scoring for Enterprise.