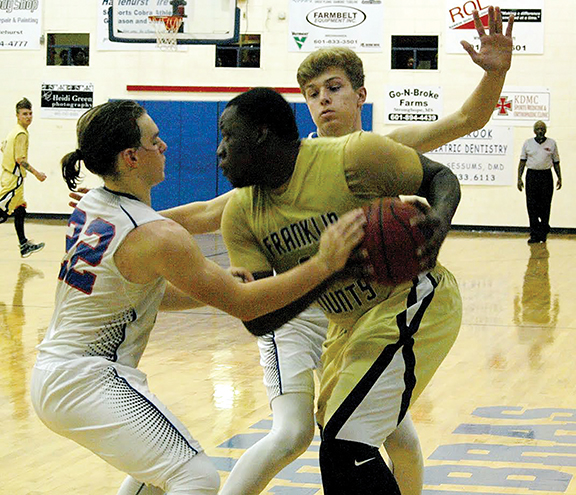 Will Hulon of Wesson (22) swarms the Franklin County ball-handler in their 71-66 victory earlier this season. (Photo by Tracy Fischer)

The Wesson Cobras used 51 attempts at the free throw line to survive against the Franklin County Bulldogs Tuesday night in a close game that ended in a 71-66 victory.

“This was a tough physical game from start to finish,” Wesson head coach Rusty Newman said. “Our defensive pressure really gave them issues at times and we were able to capitalize on their turnovers.  I’m proud of my guys for battling all night and finding a way to get the win.”

Both teams traded baskets throughout the first quarter and ended in a 14-14 tie, with 12 of those points coming from the free throw line. The fight continued with the Cobras taking an edge to jump ahead of the Bulldogs going into halftime by a score of 31-30.

Sophomore guard Shemar Dickerson was the top scorer of the game for Wesson with 18 points, going 12-of-12 from the free throw line, and senior forward Will Hulon followed with 15 points.  Sophomore guard JD Allen scored 12 points and sophomore forward Jontavius Smith had 10 points, six rebounds and five steals. Shemar Dickerson had seven steals and three rebounds.

“This is the most points we have given up all year,” Franklin County head coach Rickey O’Quinn said.  “We had too many turnovers and sent the Cobras to the free throw line too many times. We just need to get better. We are 0-3 in the division, but we will go back to the drawing board and get better.”

Cameron Young was the top scorer with 17 points and had 11 rebounds for the Bulldogs.  Other Dominique White was next in line in scoring for Franklin County with 11 points. The Bulldogs made plenty of trips to the free throw line as well, going 20-of-36 from the charity stripe.

The game started with the Lady Bulldogs getting an early lead with junior guards Jasmine Treadway and Autumn Covington putting 11 points on the scoreboard to take an early 15-4 lead in the first quarter.

Wesson struggled to get their offense going, but Franklin County’s Shemiah Amos and Thiakuria Norman blocked several shots by the Lady Cobras. The Lady Bulldogs maintained their lead throughout the game and finished with a winning score of 53-30.

“Franklin County did a really good job of attacking the lane,” Wesson head coach Candice McDuffey said. “We have to move our feet on defense a lot better and be more aggressive on offense.”

“I thought we got a pretty good start and played well defensively,” O’Quinn said. “The early start propelled us through the game.  We need to tone it up offensively, but I’m proud of the win.”

Treadway was the top scorer of the game with 20 points, six steals and five rebounds for Franklin County. Covington added nine points and five steals as well for the Bulldogs.

For the Lady Cobras, freshman guard Shelbi Maxwell was the top scorer with 18 points, including five three-pointers.