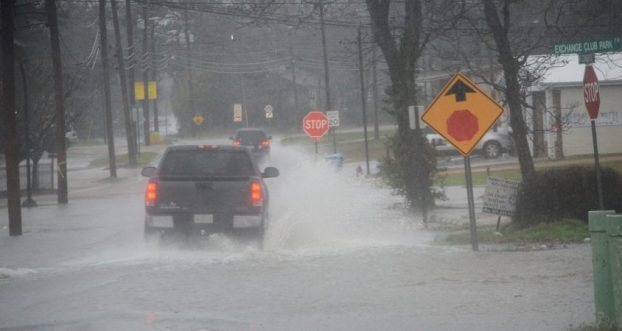 A truck travels on a flooded street Thursday morning.

Franklin County residents near the McCall Creek area should remain concerned about a potential failure of Gayle Evan Lake Dam, however officials with the National Weather Service in Jackson said that threat has been diminished through Friday morning.

If the dam fails, five to seven feet of water is possible near the dam and four to five feet of water could flood Hwy. 84 nearby.

Authorities this afternoon opened up a beaver dam that was holding back some of the water, which released some pressure on the dam. “They let the water out and the stress out,” he said. “It will be something to keep an eye on for Friday afternoon.”

A secondary dam had a failure this morning which caused some flooding to Hwy. 84.

Winesett said there is a heavy rain potential in southwest Mississippi Friday.

The first round will come late Friday night to early Saturday morning, possibly before daybreak. Lincoln County and the surrounding area could see large hail, damaging winds and “a few tornadoes as well,” he said.

There will be a lull early Saturday afternoon, followed by the possibility of more damaging hail and wind and “an isolated tornado or two.”

The NWS said there is a little more uncertainty with the second round and the main threat will be for the large hail.

On Thursday, a NWS survey team confirmed damage from an EF2 tornado east of Magee in Simpson County with damage continuing into Smith County.

Winesett said more survey teams would be out Friday in the areas reporting damage, including Copiah County where a barn on Anderson Road in Wesson was destroyed.

He said it’s not known yet if it was straight line winds or a tornado.

“It’s a potential tornado but nothing’s been confirmed,” he said.

The NWS issued the following weather forecast for the next six days:

Cloudy, then gradually becoming mostly sunny, with a high near 75. South southwest wind 5 to 10 mph.

Showers and thunderstorms likely, mainly after midnight. Some of the storms could be severe. Cloudy, with a low around 60. South wind around 5 mph. Chance of precipitation is 70%. New rainfall amounts between three quarters and one inch possible.

Showers and thunderstorms likely. Some of the storms could be severe. Mostly cloudy, with a high near 73. South southwest wind around 5 mph. Chance of precipitation is 70%. New rainfall amounts between a tenth and quarter of an inch, except higher amounts possible in thunderstorms.

Showers and thunderstorms likely. Mostly cloudy, with a low around 54. South southeast wind around 5 mph becoming southwest after midnight. Chance of precipitation is 60%. New rainfall amounts between a quarter and half of an inch possible.

A 50 percent chance of showers and thunderstorms. Partly sunny, with a high near 64. Southwest wind 5 to 10 mph.

Mostly clear, with a low around 45.

A 20 percent chance of showers. Partly cloudy, with a low around 53.

A 30 percent chance of showers. Partly sunny, with a high near 68.

Inaugural speech is Trump’s time to rise to the moment