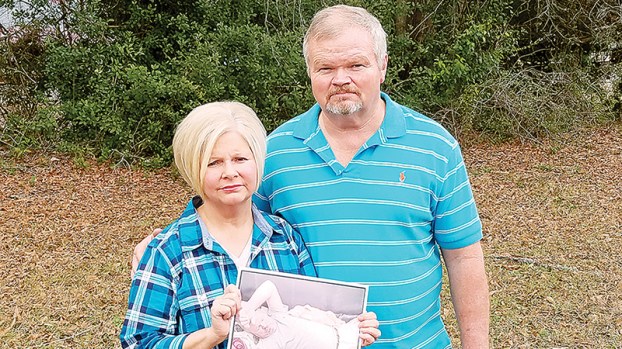 Photo by Donna Campbell/Jimmy Davis comforts his wife, Dinki, Wednesday after their case was heard in Lincoln County Justice Court. Davis holds a picture of her husband with Lanie Bug, a friendly kitten that was mauled to death along with 15 of the Davises' other cats in December.

Two Lincoln County pet owners found guilty of violating the county’s vicious dog ordinance Wednesday were fined more than $1,200 and sentenced to seven days in the Lincoln County Jail, which the judge suspended.

Their dogs were sentenced to death.

Justice Court Judge Joe Portrey also instructed Elton Smith and his niece, Caitlyn Smith, who were tried together, to keep the dogs confined or placed in an area of security immediately.

The Smiths have 10 days to file an appeal in Lincoln County Circuit Court to prevent the dogs from being picked up by the Lincoln County Sheriff’s Office and euthanized.

The Smiths’ dogs mauled to death 16 cats in a fenced enclosure on the property of James and Belinda “Dinki” Davis on Dec. 15.

The Smiths and the Davises are neighbors near the Heucks Retreat community.

Dinki Davis, who testified in the case, said she was satisfied with the outcome, but hated that it had to go this far. “We just don’t want anything bad to happen to anyone else’s animals, or to a child.”

The prosecutor initially asked only for restitution for the Davises for a $90 vet bill for a kitten, Lanie Bug, that had survived the attack by the dogs only to die later that day from its injuries.

The case lasted only 20 minutes.

Testimony included a visibly shaken Davis who described what she found when she arrived home after the breakfast shift at Dude’s Hot Biscuits, their family-run restaurant.

She came home early to check on the three dozen cats the couple had rescued over the years, and who were housed in two separate fenced and covered enclosures.

When she arrived home, she heard barking behind her house — her own dog and what sounded like other large dogs, she said.

Davis began to cry as she talked about calling her husband Jimmy to ask him to rush home.

“I could hear the cats screaming,” she said. “I told him, ‘Bring the gun because I know they’re in there.’”

When her husband arrived, he pulled the tarp down from the enclosure where the cats were housed. “They had just … they were mauled,” Davis said. “The dogs were still in the enclosure and they charged toward him.”

That’s when they called 911 and asked a deputy to come out, she said.

While they were waiting for the deputy to arrive, Caitlyn Smith pulled up in the Davises’ driveway and asked about a white pit bull and a German Shepherd, Davis testified.

Davis said the dogs had pushed in through the bottom of the padlocked door.

Security cameras had been installed, but when the dogs broke into the enclosure the wires to the camera were torn, disabling the ability to record video of what took place, she said.

Davis said she’d seen the German Shepherd in her yard two times previously, and each time it “came at me,” so she knew it was an aggressive animal.

Davis said the scene was traumatizing. “We had to burn just about everything in the kennels. There was all that blood,” she said.

She said she and her husband had spent thousands of dollars on shots, beds and the care of the cats to give them a good life. “These were rescued animals,” she said.

Jimmy Davis also took the stand and said he saw dead cats everywhere. “The bulldog’s face was covered with blood,” he said.

He told the judge that when the dogs saw him outside the chain link fence, the pit bull charged at him.

Elton Smith declined to take the stand, however, his niece, Caitlyn Smith, did.

“I went to get my dogs because I heard her screaming,” she said of Davis, who lives down the street. “When they’re missing, most of the time they go to other dogs. And I know she’s got dogs over there, too.”

She said Davis pushed her, so she sat in her car until the deputy arrived. The deputy told her to take the dogs home, so she did, and kept them locked in a pen ever since, she said.

Franklin County residents near the McCall Creek area should remain concerned about a potential failure of Gayle Evan Lake Dam, however... read more