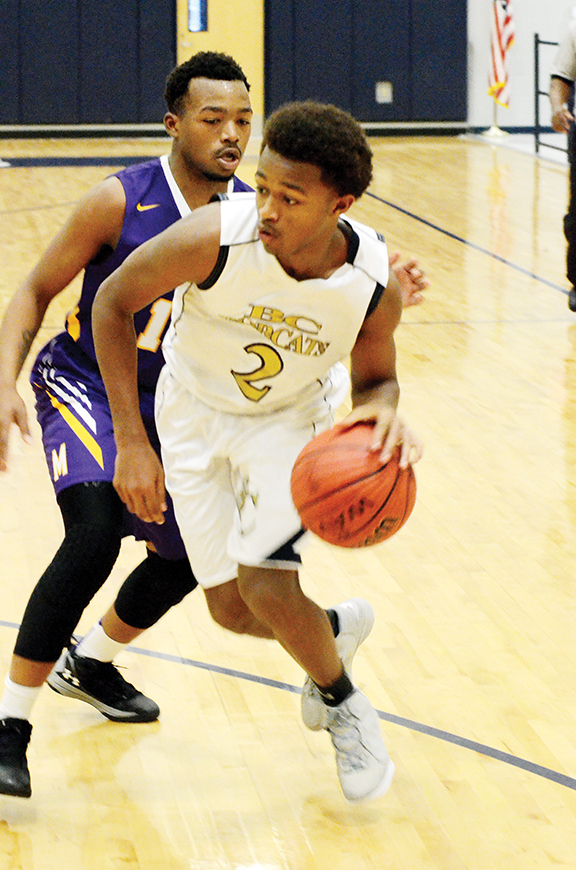 Henry Thomas of Bogue Chitto (2) drives to the hole in their win Thursday night against the MS School for the Deaf 66-39. (Photo by Dylan Rubino)

The Bogue Chitto Bobcats and Lady Bobcats both got district wins Thursday night against the Mississippi School for the Deaf. The Bobcats moved to 4-16 overall with their 66-39 win over the Bulldogs and the Lady Cats advanced to 7-10 overall and picked up their second win in district play.

The Bogue Chitto Bobcats got their first district win of the season Thursday night with a 66-39 victory over the MS School for the Deaf Bulldogs.

“We start off way to slow offensively in the first half,” Bogue Chitto head coach Mark Pitts said. “We played a very good second half, but we got to get to work to get better.”

Offensively for the Bobcats, three players scored in double figures to lead a balanced attack on offense. Freshman forward Zach Upkins led the team with 12 points. Freshman forward Josh Thomas was able to contribute with 11 points as well. Senior forward Henry Thomas was next in line in scoring with 10 points.

“We started out very slow offensively, but throughout the game we were able to pick up our game,” Bogue Chitto head coach Christi Terrell said.

The offense for Bogue Chitto picked up in the second quarter as they outscored the Bulldogs 19-5 to take a 26-11 lead going into halftime.

The Lady Cats scored 21 points in the third quarter to give them a comfortable lead going into the fourth. The Lady Cats would finish the fourth quarter scoring 12 points to add on their lead pick up the victory 59-32.

“This was a great district win for my girls,” Terrell said. “Everybody got a lot of playing time throughout the game.”

Bogue Chitto travels to Mount Olive tonight to take on the Pirates. The Lady Cats tip off at 6 p.m. with the Bobcats following up at 7:30 p.m.

Entering the final weekend of soccer action in the area, wins will be crucial as Brookhaven, Loyd Star and Wesson... read more