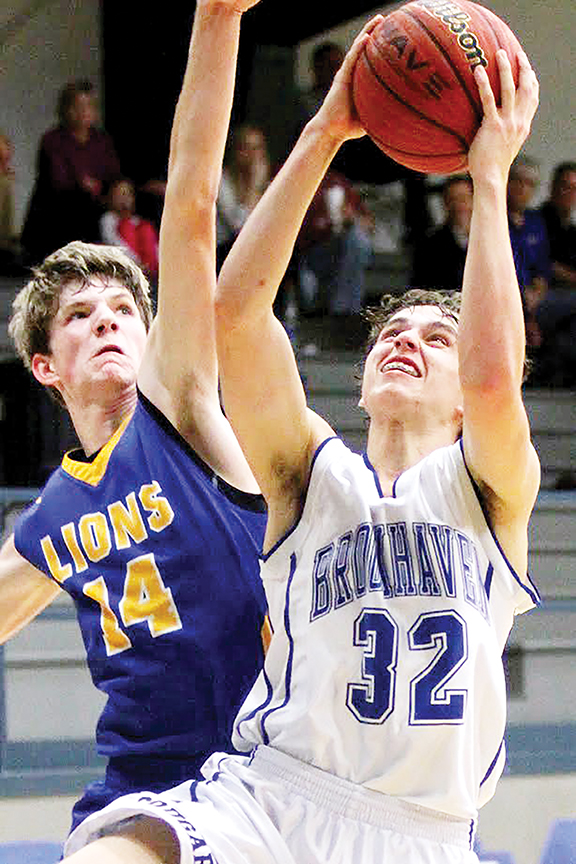 Ethan Nations of Brookhaven Academy (32) puts back the shot in their victory Friday night against Laurel Christian Academy. (Photo by Sherylyn Evans)

The Brookhaven Academy Cougars and Lady Cougars both improved their district records when the Laurel Christian Lions visited the John R. Gray Gymnasium Friday night. The Cougars tamed the Lions by a score of 64-36 and the Lady Cougars won their contest by a score of 52-12.

The BA Cougars (19-6) posted a 40-17 lead at halftime and cruised through the final two frames to pick up the 64-36 win. Dawson Flowers and Cade Brown had 11 points each to lead Brookhaven Academy. Ethan Nations and Tate Felder followed close behind with 10 points each as well. Karsten Nobles had nine points to lead Laurel Christian in scoring on the night.

The Lady Cougars (16-8) faced little resistance from the Lady Lions on their way to a 52-12 victory. Anna Michael Smith led the way for BA with 18 points. Kailyn Jordan and Jana Case added six points each in support. Lauren Loper had six points to lead Laurel Christian.

The BA JV Lady Cougars came out of the gates aggressive on their way to a convincing 62-23 win. Makayla Martin led BA with 15 points. Madison Moak added 12 points and AB Warren followed with nine points in support.

The BA JV boys jumped on the Lions early and coasted to the 39-14 win. Tyler Fortenberry led the Cougars in scoring with nine points.  Britton Nelson added eight and Gavin Brogden added seven points to the BA total.

BA will be back at home Tuesday afternoon facing off with Simpson Academy in crucial district contests. Seventh grade boy’s action is set to tip off at 3 p.m. followed by JV girls, JV boys then varsity girls and boys action to wrap up the evening.

Loyd Star and Amite County went back and forth Friday night, but the Hornets pulled through in the fourth quarter... read more