The Bogue Chitto eighth-grader will be competing Monday at her school in the district spelling bee against other students in grades four through eight who won their schools’ spelling bees.

Windmiller, the daughter of Johnathan and Anna Windmiller and Mark and Kim Jones, competed at her school bee with about a dozen other students before advancing to this week’s district competition.

Though she’s focused on coming out on top in the competition, she’s also planning ahead to  what she wants to do in college and afterward. She said she’ll probably get a degree in marine biology from a university in Florida, since it’s surrounded mostly by oceans.

She entered Bogue Chitto’s spelling bee because she wants to get into a good school and she figured “spelling bee winner” would look good on the application. It doesn’t hurt that spelling is one of the 13-year-old’s favorite subjects, either.

The last time she took a spelling test that was not bee-related was in fourth grade. But her English teacher then, Amy Burt, gave her some advice that still helps her now.

“She told me to write the word seven times to help me remember it,” Windmiller said. “So I do that and say each letter out loud as I’m writing it. It works really well.”

In addition to this routine to learn new words, Windmiller’s parents quiz her aloud as if she were actually competing. They mainly use a list of hundreds of words supplied by her teacher, Mary Oswalt. Though most of the words are English, some are in other languages, like Latin, Arabic, French, Dutch, Old English, Greek and Japanese.

Some of the strangest words Windmiller has come across are kind of hard for her to say. “One is sanctum sanctorum,” she said. “It means ‘holy of holies.’”

But the hardest so far is one of the last on the list. “I don’t even know how to say it,” she said, gigging, “but it’s intermentu-something. I’ll have to ask my dad about that one.”

Practicing for the spelling bee has expanded Windmiller’s vocabulary. “I’m able to use more advanced vocabulary than other students,” she said.

Windmiller said her brothers aren’t spellers yet — they’re only 2- and 3-years-old. This is her first year in a spelling bee and, because of the grade restrictions, it will also be her last. No spelling bee opportunities for high schoolers are readily available in the county, she said.

Going into this district competition, Windmiller says she’s confident and excited. Although one of the more difficult foreign words she faces is “hors de combat,” meaning “out of the fight,” that’s not where Windmiller sees herself.

“I think I’ll stay in through a lot of the rounds,” she said. 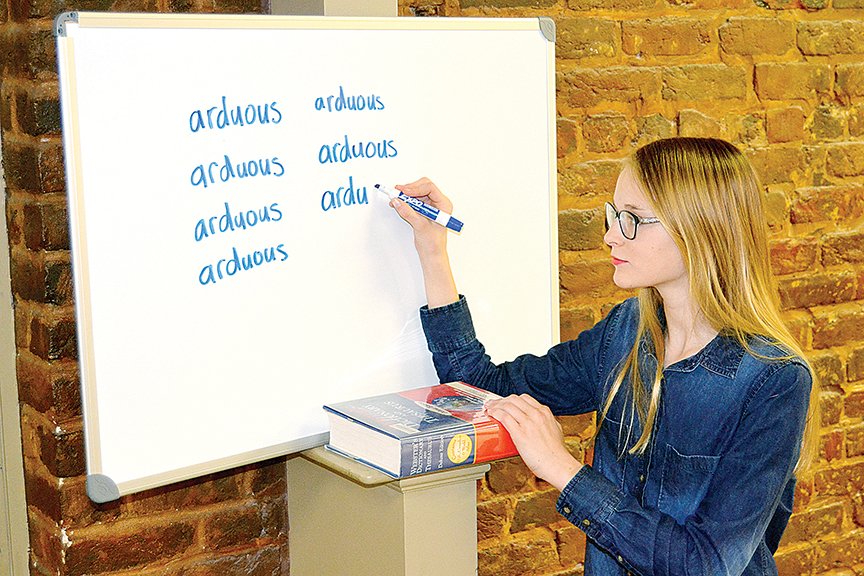 Photo by Donna Campbell/Kylie Windmiller, an eighth-grade student at Bogue Chitto Attendance Center, hopes to take first place in the district spelling bee so she can add the accomplishment to her college applications.