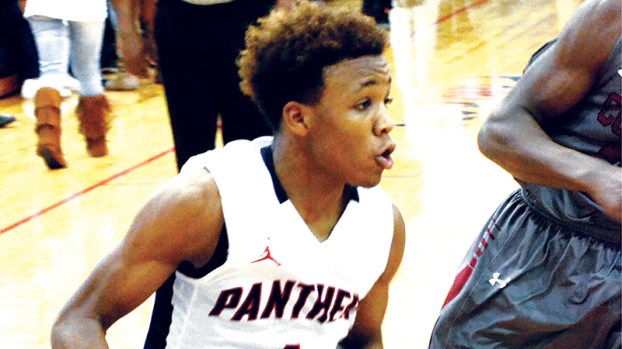 Photo by Dylan Rubino/Denarius Gray of Brookhaven (1) dribbles baseline in a game earlier this season.

The Brookhaven Panthers went on the road to district foe Wingfield Friday night and picked up a crucial win taking down the Falcons by a score of 81-68.

“We played and won a great ball game tonight,” Brookhaven head coach Jimmie Butler said. “Our guards forced them into an up-tempo style of play. Our zone defense forced them to shoot three-pointers. Those long rebounds helped us get into transition which led to layups and open shots.”

Brookhaven came out with an aggressive mindset early and jumped out to a commanding 25-12 lead at the end of the first quarter. The Falcons would keep pace with the Panthers in the second quarter as Brookhaven ended up taking a 40-27 lead going into halftime.

Brookhaven came out explosive on offense to open up the second half as they outscored Wingfield 26-18 in the quarter. The strong offensive output gave the Brookhaven Panthers a 66-45 lead heading into the fourth quarter.

Even trailing by 19 heading into the final quarter of action, the Wingfield Falcons would not go down without a fight. Wingfield outscored Brookhaven 23-15 in the quarter, but the deficit was too much to overcome as Brookhaven would run away with it 81-68.

The win gives Brookhaven seven wins in their last eight games with their one loss coming in a one-point defeat to Provine earlier in the month.

It was a dominant game from senior guard Damarius Brooks, who finished the game with 29 points on 9-of-19 shooting from the field, adding on four rebounds and two steals. Sophomore forward Lafollette Bogan followed up by scoring 17 points on 8-of-16 shooting from the field and reeling in seven boards. Senior point guard Denarius Gray played a complete game with 14 points, seven assists and five rebounds.

Wingfield was led by senior guard LaAndre Thomas, who scored 15 points on 5-of-14 shooting from the field.

It was a tale of two halves for the Brookhaven Lady Panthers as they used a strong second half to blow by the Wingfield lady Falcons by a score of 77-56.

Brookhaven started slow as Wingfield jumped out to take a 16-11 lead at the end of the first quarter. Things started to change in favor of the Lady Panthers as they outscored Wingfield 19-11 in the quarter to take a 30-27 lead into halftime.

Sophomore point guard Shania Harris led the Lady Panthers with 17 points on the night; 15 of them coming in the second half. Senior forward Cheyenne Motley followed up scoring 14 points for the night.

Senior guard Brianna Thompson led the Lady Falcons in scoring with 16 points for the game.

Next up for Brookhaven is a home district game against Provine Tuesday night. The Lady Panthers tip off at 6 p.m. followed by the Panthers at 7:30 p.m.

The Brookhaven Academy Cougars and Lady Cougars both improved their district records when the Laurel Christian Lions visited the John... read more