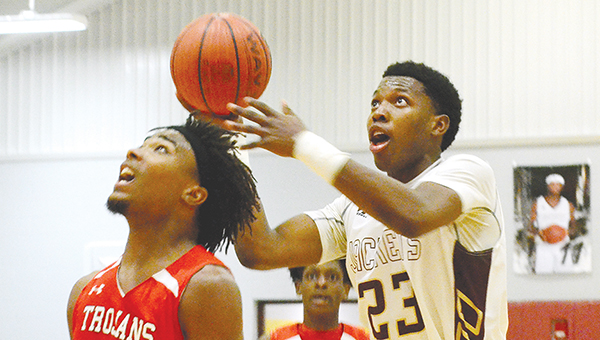 Photo by Dylan Rubino/ Dwayne Pendleton (23) of Enterprise finishes near the rim in a game earlier this season.

Enterprise hosted Prentiss Friday Night came into the matchup looking fto pick up an important district win for both the Jackets and Lady Jackets. The Lady Jackets showed improvement from Tuesday night’s game, as they defeated the Lady Bulldogs 51-46. Prentiss was able to outlast Enterprise as the Jackets dropped a tough contest 48-44.

Prentiss opened up the game on a 7-0 run to take momentum early. Halfway through the first period, Enterprise was finally able to make it into the scoring column and the offense started to settle with Prentiss taking a 13-7 lead into the second period.

Prentiss’ defense was able to force turnovers and turn them into transition baskets, taking a 23-17 lead into halftime.

The defense for the Bulldogs picked up where they left off before halftime, scoring off of more turnovers. Enterprise was able to cut into the Prentiss lead, trailing 34-26 heading into the fourth period.

“We didn’t play well, but overall the boys gave a good effort. Thought we played better in the second half. We gave ourselves plenty of chances to win at the end and just couldn’t make the shots,” Enterprise head coach Shane Adams said. “Prentiss is a good athletic team. Now we got to get ready to face another one Tuesday in Bassfield. I’m proud of the boys for fighting back into the game. We just need to make shots.”

Enterprise was led by senior guard Dwayne Pendleton with 17 points and three rebounds for the game. Junior forward Cade Feltus followed up with 16 points on the night. Senior guard Darren Richardson contributed well with eight points and reeled in eight rebounds as well.

Sophomore forward Tykevious Daniels was the leading scorer for Prentiss with 18 points. Senior guard Tim McNair Jr. followed up with 13 points for the Bulldogs.

Despite getting off to a slow start, the Lady Jacket defense was able to cause problems for the Lady Bulldogs, which they quickly turned into points. Enterprise took a 9-7 lead into the second period.

With over three minutes left in the half, the Lady Bulldogs took their first lead of the game, only to see Enterprise quickly re-take the lead. The Lady Jackets built on their lead thanks to stellar play on offense and defense as they headed into halftime leading 22-13.

The defense for Enterprise picked up where they left off, taking advantage of forced turnovers. As time was running out in the third, the Lady Bulldogs managed to tie the game at 31 heading into the final period.

The Lady Bulldogs took the lead to start the fourth, but a pair of free throws from Enterprise junior guard Jana Nations tied the game. With over three minutes left in the game, the Lady Jackets started to build on their lead. In the end, Enterprise held on against Prentiss to take home the 51-46 victory.

“Great to get first a district win. It was a hard fought game between both teams.” Enterprise head coach Jill Nations said.

Enterprise will be in action Tuesday night as they host Bassfield in district play. Tip off is scheduled for 6 p.m.

The Wesson Cobras were defeated by the Port Gibson Blue Wave Friday night by a final score of 73-54.  “This... read more