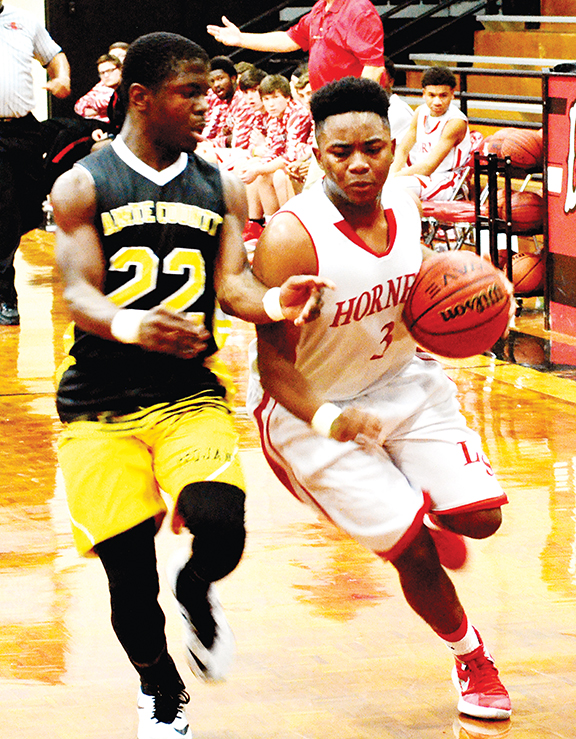 Zac Arnold of Loyd Star (3) takes contact driving to the basket in their 65-61 victory over Amite County Friday night. (Photo by Dylan Rubino)

Loyd Star and Amite County went back and forth Friday night, but the Hornets pulled through in the fourth quarter thanks to free throws and stops on defense in their 65-61 win over Amite County.

The victory moves Loyd Star to 9-6 overall and 4-1 in district play.

“We made some good free throws down the stretch and we also missed some. We got some key rebounds at the end as well to seal it,” Loyd Star head coach Gene Britt said. “I’m proud of the kids. They did what they had to do out there to win the ball game.”

Amite County came out aggressive on defense in the first quarter and threw the Hornets out of their rhythm early, forcing turnovers and turning those into transition baskets. Because of that, the Bulldogs took a 17-8 lead at the end of the first quarter.

The offense started to settle in in the second quarter as the Hornets found some open looks and outscored Amite County 17-8 to tie the game at 25 heading into halftime.

The third quarter was an even battle as Amite County outscored the Hornets 17-16 to take a slim 42-41 lead heading into the final quarter of action.

Both teams would enter the bonus just around two minutes into the fourth quarter, resulting in numerous trips to the free throw line. That would ultimately be the difference in the ball game. Loyd Star would take 36 free throw attempts for the game, with 22 of them coming in the fourth quarter to ultimately seal the victory. Thanks to the free throws, Loyd Star outscored the Bulldogs 24-19 in the quarter to pick up their fourth district win.

The loss moves Amite County to 1-15 on the season with 11 of their losses coming by less than 10 points, but Britt gave their team credit, despite what their record shows.

“We beat a very good team tonight,” Britt said. “Their record isn’t what it looks like. They’re way better than whatever the record shows.”

The Hornets were led by the tandem of senior point guard Zac Arnold and sophomore forward Dane Smith all night. Both players scored 22 points on the night, but Smith showed up big time in the second half. The sophomore scored 18 of his 22 points in the second half and 12 of them in the fourth quarter. Smith took 13 free throw attempts in the final quarter and made eight of them to lead the Hornets.

Arnold helped with the fourth quarter scoring with eight. Junior guard Cade Hodges was next in line in scoring with 14 points on the night.

It was nothing new for the Loyd Star Lady Hornets Friday night as they dominated from start to finish en route to a 64-29 victory over Amite County.

The victory moves the Lady Hornets to an impressive 14-1 on the season and 4-1 in district play.

“Our defense got a lot of steals and took them out of their offense quickly,” Britt said. “They played steady ball all game long. We got to play some of our subs and it was a great night for the girls.”

The defense shined as the Lady Hornets held Amite County to 11 points in the first half, taking a 30-11 lead at the break. They wouldn’t let up the rest of the way and never took their foot off the gas and won handedly in the end.

Senior guard Caylee Yarborough led Loyd Star in scoring on the night with 15 points and senior guard Lydia Britt followed up with 12 points.

Next up for Loyd Star is home games against Lincoln County rival West Lincoln Tuesday night.

Co-Lin Wolves lose on the road to East Central

DECATUR – The Copiah-Lincoln Wolves were unable to overcome a strong second half outing by East Central. The Warriors scored... read more