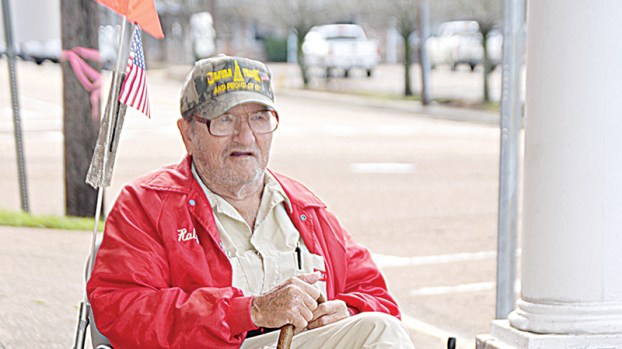 Photo by Donna Campbell/Ralph Smith parks his wheelchair at one of his favorite spots at the corner of East Monticello and North First Street so he can talk to folks as they pass by.

Ralph Smith: ‘Service to humanity is the best work’

“Little Ralph” Smith is 85 years old and as energetic as any man in a wheelchair could be.

A member of the Episcopal Church of the Redeemer, the Brookhaven native has a personal mission that keeps him rolling daily.

Nearly two years ago, someone gave him a laminated card with “A Prayer of Saint Francis Assisi” on one side, and a portrait of the saint on the other. He didn’t pay it much attention until one day he saw it on his bathroom mirror. “So I picked it up and read it right there,” Smith said. “As soon as I finished, I rode on down to the Episcopal church there and ordered 200 of them.”

Since then, he’s been giving them away to anyone he can.

It’s his way of following the Jaycee creed. “One of the main things in my life is the motto of the Junior Chamber of Commerce,” said Smith, “‘Service to humanity is the best work of life.’”

For years, Smith worked on oil rigs in India and Pakistan, and on his days off he would visit local villages. The first day he drove into a village in his van, the women and children would hide. Once they understood his van was carrying groceries for him to give away to the families, people began to greet him as he arrived.

He’d never had a problem talking to people. As a young man, Smith purchased copies of “The Semi-Weekly Leader” for three cents a copy, and sold them on First Street for a nickel.

He was born and raised in Brookhaven, and has a daughter still nearby. Smith’s mother was Methodist and his father was Baptist, but they sent him to the Catholic school.

When he married an Espicopal girl in Port Arthur, Texas, he started going to church with her. During that first service, he said the bishop told everyone they could leave before the sermon if they wanted to, but the ones who stayed would not be staying to hear him speak. They’d be staying to meet with God. According to Smith, that’s exactly what happened. “I had a meeting with God,” he said, “and I’ve been his ever since.”

“I’ve always kept my promises to God,” said Smith, “but he hasn’t kept up his end of the bargain. I told him I’d buy 100 lottery tickets, and I’d give everything I won to charity. But I ain’t won.”

He’d love to write big checks to St. Jude Children’s Hospital and Shriners Hospitals for Children. “There’s a boy there who writes with his feet. I’d love to make the check to the hospital and to that boy, so he’d have to sign it, too,” Smith said, laughing.

He often dreams he’s died and met his Maker, but he’s still here. Because he’s still alive, Smith said he wants to help others, and giving them an encouraging prayer from St. Francis is a good way to do that. He buys 200 at a time – “You gotta buy ‘em that way” – and is getting close to ordering for the seventh time. That’s almost 1,200 cards given away.

His other favorite way to help people is just to talk. He sits outside the building at 102 Monticello St. in his motorized wheelchair, across from Foster’s Chevron, and talks to people all the time who stop to chat with him. Part of it is because he loves to talk, he said. The rest is location. “I ain’t hard to find,” he said.

Southwest Mississippi is under the threat of severe weather with the possibility of tornadoes this morning, according to the National... read more