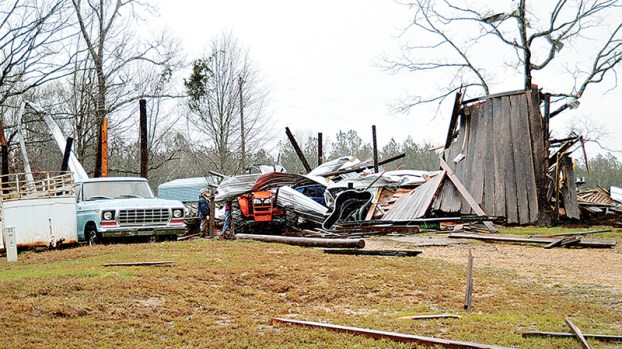 Damage in Wesson Thursday was caused by a downburst, not a tornado, Copiah County Emergency Management Director Randle Drane said Saturday, even while he was helping survey the damage in Petal caused by a tornado that ripped through Forrest County early Saturday morning.

Four people were killed in the Hattiesburg area and dozens were injured from the storms.

Drane said the damage he was seeing in Petal and Hattiesburg was extensive and heartbreaking.

“They’ve got some major damage over here,” he said.

Greg Flynn, communications director for the Mississippi Emergency Management Agency, said the tornado, which was confirmed and seen on the ground, touched down in the area of U.S. 49 and Hwy. 11 and traveled south.

“There are a lot of subdivisions in the path of the tornado,” Flynn said. “There is extensive home damage and it happened just a few blocks from downtown.”

The NWS is sending in a team to determine the strength of the tornado, Flynn said.

Glenn Moore, the emergency management director for Forrest County, said the twister touched down about 3:30 a.m., damaging businesses and homes.

Moore said three people were killed in mobile homes and one in a house, and at least 25 were reported injured.

The heaviest damage, he said, was between James Street and the William Carey University campus, and in Petal near W.L. Smith Elementary School.

First United Methodist Church in Brookhaven is collecting items to take to people in the Hattiesburg area.

FUMC youth coordinator Becky Green’s son is a sophomore at University of Southern Miss and a youth intern at Court Street UMC. He told his mother that area was hit hard by the storms.

“We were real concerned about the people and wanted to do something in that area because of our connection,” she said. From what the pastor said, this damage is much more devastating than the tornado that came through four years ago.”

Supplies can be dropped off Monday through Friday from 9:30 a.m. to noon at the FUMC Ministry Center at the South Jackson Street entrance.

“A downburst is a pocket of air that the storm releases and it hits the ground. It has no rotation to it,” he said.

He said the barn had three walls and a roof, so “the air got up in there and had now here to go so the barn kind of exploded.”

“If you look at the storm the other night, when it left Lincoln County it was a severe thunderstorm warning, and immediately it went to Copiah County as a tornado warning. That’s how easily the weather can change.”

He said residents should be aware of approaching bad weather and take appropriate action.

“The biggest thing is, people need to have the notification — a weather radio or have a cell phone alert when a storm is coming through. NWS is sitting there watching the radar and once they push the button, everyone knows about it,” he said.