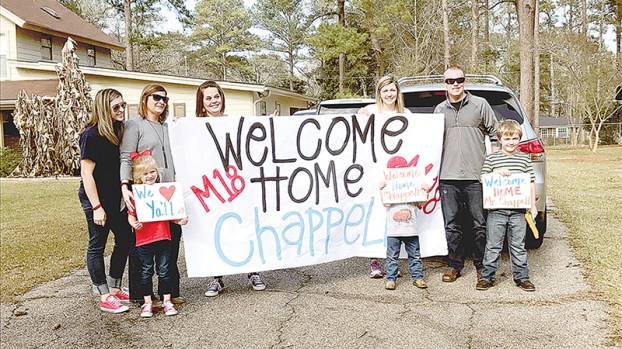 Photo submitted/Family and friends gathered outside Trooper Mitchell and Amanda Chappell’s home Saturday to welcome the highway patrolman home after he’d spent months in rehab for injuries he suffered during a Sept. 11 crash of his cruiser on I-55 as he headed to an emergency call. With the Chappells and the homemade sign are Brooke Speed with Lily Speed (left), Amanda Chappell, Rachel Marrs, Kelsey Wilkinson, Mitchell Chappell and John Speed, with Layton Marrs in front.

Usually State Trooper Mitchell Chappell is the one flashing his lights and letting his siren wail, but on Saturday, the highway patrolman sat back and let someone else in uniform lead the way.

Chappell, who was injured Sept. 11 on his way to a traffic collision in Bogue Chitto, came home to Brookhaven over the weekend to a hero’s welcome.

Sgt. Andrew Montgomery and Deputy Barry Huff, both with the Lincoln County Sheriff’s Department, met Chappell and his wife, Amanda, in Jackson and escorted them home.

“He is back here for good and he is beginning outpatient therapy at Methodist Rehab soon for three days a week,” said Cpl. Brandon Fortenberry with the Mississippi Highway Patrol.

Chappell had been recovering steadily since the accident Sept. 11.

In November, Amanda Chappell, a home healthcare nurse, said her husband had progressed to a point where he was becoming more independent and walking with supervision. Since the accident, the trooper had been in the critical care unit of University of Mississippi Medical Center for treatment of his injuries, which included a fractured skull on the back of his head, before being transferred to a rehabilitation center in October. He began outpatient therapy on Nov. 28 in Atlanta.

“We still have a long way to go to get back 100 percent, but we have been so blessed with Mitch’s progress so far compared to any diagnostic testing,” she said in November. “He is in great spirits and cognitively remembers pretty much everything but the wreck itself and the weeks following in ICU. He has been so overwhelmed with all of the support he’s seen online and in the community and is so very thankful, as am I, for every prayer, donation and word of encouragement.”

Montgomery said word traveled quickly around Lincoln County that Chappell would be released from the hospital. First responders all wanted to get in on the welcome home celebration. Fire fighters, police, troopers and deputies gathered with Chappell’s families and friends at the couple’s home to greet him on his return.

“It’s something we were glad we could do for him to show him that we missed him, and as a brotherhood, that we love him,” Montgomery said. “We were just honored to be invited to do that.”

The sergeant said Chappell looked excited to be home.

“He said he loved it,” Montgomery said. “If he got out of his car and was happy with it, we’re happy with it. You couldn’t ask for a better man and a better trooper, and his wife is right there with him.”

Fortenberry said Chappell has been missed in Troop M. “Troopers in District 9 are overwhelmingly happy that Trooper Mitchell Chappell has arrived home and continuously strives to get back to the patrol,” he said. “His efforts in the last few months in his therapy speaks highly of his dedication to get back to the job of serving the people in the ways he knows best. Troop M again thanks everyone for keeping Chappel in your prayers.”

Lincoln County Sheriff Steve Rushing said Chappell is an inspiration. “Great guy who did an outstanding job as a trooper,” he said. “Very happy to see him working to overcome his injury and glad to see him home.”

Chappell was on his way to a two-vehicle collision in Bogue Chitto when his car apparently hydroplaned in the northbound lane of I-55 near mile marker 31. Dispatchers lost radio contact with him, and he was found soon after unconscious in the restraints of his cruiser, which had collided with a patch of trees, Fortenberry said.

Another trooper, headed to help them, also hydroplaned on Hwy. 84 near Jackson-Liberty Road. A Lincoln County Sheriff’s deputy eventually took Chappell to KDMC, where he was transferred to UMMC by ambulance, he said.

All three cruisers were totaled, Fortenberry said. The other two troopers were not injured. 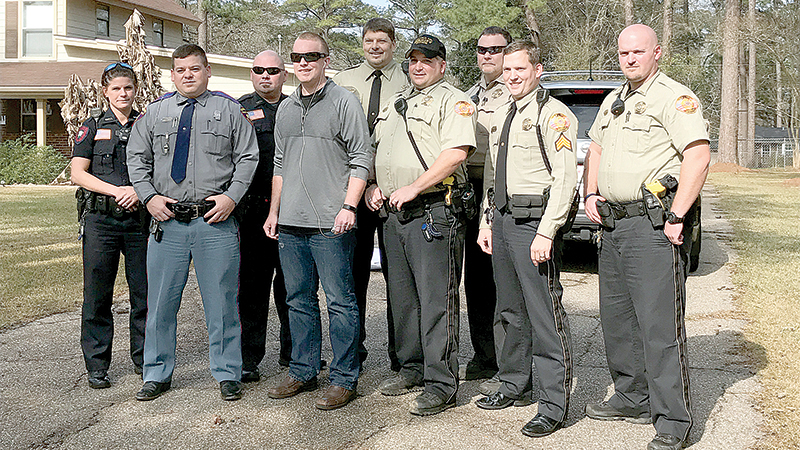 PETAL (AP) — Cynthia Holland has to repair her liquor store. William Carey University has to find a place to... read more