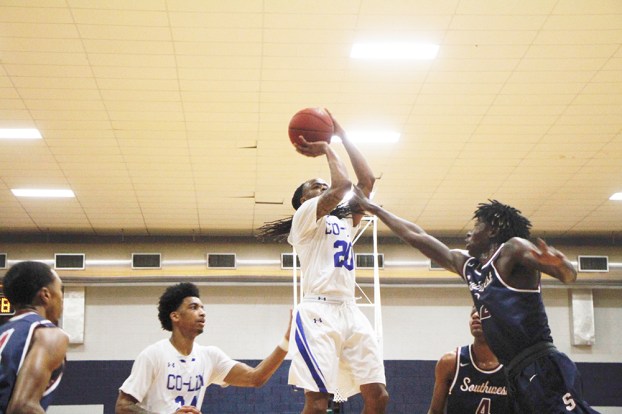 Mullen Gymnasium was louder than ever Monday as anxious fans watched the Co-Lin fend off Southwest in the final minutes to secure a 73-72 victory. The win moves the Wolves to 8-6 on the season and 2-3 in the MACJC South Division while Southwest falls to 10-4 and 4-1.

Co-Lin is back in action Thursday as the Wolves travel to Meridian to take on the Eagles. Tip off is set for 7:30 p.m. The Wolves are back home Monday, Jan. 30, versus Pearl River beginning at 8 p.m. Watch home games live at colinathletics.com or listen live at WMJU 104.3 FM in Brookhaven.

The contest was back and forth throughout the night as the lead changed hands 11 times. Co-Lin led by as many as five in the opening half before the Southwest’s Emanuel Thompson rallied the team back. The Bears took their largest lead of the game, seven, with just 1:27 remaining in the first half and took a five-point lead into the locker room.

The Wolves opened the second half of play with dominating performances on both ends of the flood. The Wolves strung together an 11-0 run over a five-minute span. The offensive spurt gave Co-Lin a six-point lead with 15:56 remaining.

Co-Lin continued to pull away from the Bears and stretched the lead to a game high 10 points with 2:03 remaining. Late fouls began to hinder the Wolves as the Bears clawed back into contention with successful free throw shooting. The Wolves struggled at the line in the final minutes, but made key rebounds to secure the one-point win.

Freshman forward Darrian Wilson of Brookhaven led the Wolves in scoring with 17 points. Wilson shot 6-for-10 from the field and 4-for-8 from three-point range. Lamarcus Lee added 15 points, while Jonathan “Biscuit” Floyd poured in 11 points. Youry White, Tyrell McArthur, and Lee led the team on the glass with five rebounds each.

Rodrick Sikes led the Bears in the point’s column with 28, while Emanuel Thompson added 18.

The Copiah-Lincoln Community College Lady Wolves played lockdown defense Monday night as Co-Lin defeated the Lady Bears of Southwest 65-49. The victory stretches Co-Lin’s win streak to nine and gives the Lady Wolves a 12-1 overall record on the season and a 5-0 record in the South Division. The win was also head coach Gwyn Young’s 899th career win at Copiah-Lincoln.

The Lady Wolves take the court again Thursday as the Lady Wolves travel to Meridian for a 5:30 p.m. tip. Co-Lin is back in Mullen Gymnasium Monday, Jan. 30, at 6 p.m. versus Pearl River. Watch home games live at colinathletics.com and listen to all games throughout the season at WMJU 104.3 FM in Brookhaven.

The first half of Monday’s contest proved a defensive battle as the Lady Wolves took a 28-22 lead into the locker room. The Lady Wolves led by as many as 11 in the first two quarters of play.

A 7-1 run from Southwest to start the second half quickly put the Lady Bears back into the game, but the spark was short lived as Co-Lin responded with a 10-1 run of their own to extend the lead back to 11 with 9:47 remaining in the fourth quarter. The Lady Wolves continued to pull away throughout the quarter as a host of players saw action late in the game.

Tenazhia Hinkson was the Lady Wolves only double-digit scorer as she netted 19 points and brought down seven rebounds. Karry Callahan finished with nine points and six rebounds while both Debraia Bell and Alexus Holt posted eight points. Diamond Smith finished with seven points and a season high nine blocks.

The Brookhaven Academy Cougars and Lady Cougars faced a tough challenge Saturday afternoon as they traveled to Columbia Academy in... read more